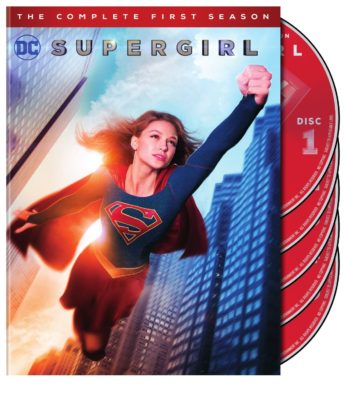 Instead of the twenty-two or twenty-four episodes CBS shows usually get, Supergirl’s order was reduced to twenty – which may be one of the reasons it didn’t have many dud episodes.

The rest of the season wasn’t quite as jam-packed, but brought in elements from the comics is a mostly fresh way (Fallen, the Red Kryptonite episode, didn’t work for me being as how Clark Kent went through a similar experience on Smallville).

There were villains from the comics or rejigged from the Richard Donner Superman (Livewire, Non, Banshee, Indigo – played by Smallville’s Kara, Laura Vandervoort, and a Helgrammite among others). We met Kara’s mother, Alura Zor-el through a hologram reference program – and her twin sister Astra (Laura Benanti in a dual role) in the flesh; Lucy Lane (Jenna Dewan) and her father, General Sam Lane (Glenn Morshower), and even caught sight of baby Kal-el – and a tween Kal in one of the season’s best eps, For the Girl Who Has Everything.

Probably the most fun of the characters (outside of Kara’s tiny ring of friends and family) was Maxwell Lord (Peter Facinelli), who wants to save the world without the help of super beings – and is not afraid to use some pretty dirty tricks to do so.

The show subtly (and not so subtly) engaged the idea of feminism (there’s a great Cat Grant speech about how Supergirl isn’t the least bit derogatory; Kara insists on doing things without the aid of her better known super cousin); played to the value of families (the ones we’re born into; the ones that choose us, and the ones we choose); guest starred The CW’s Flash (Grant Gustin) in a two network crossover, and was mostly good old-fashioned fun.

Technically, some of the effects weren’t quite movie quality, but a surprisingly high percentage were – the show’s writers clearly chose their moments for big splashes carefully.

Melissa Benoist was so natural as both Supergirl and Kara Zor-el/Danvers that Kara could probably make a career of acting if the CatCo thing doesn’t work out.

A standout I haven’t mentioned yet is Jeremy Jordan (Smash) as Kara’s best friend, Winn Schott – who has two big secrets (one being his crush on Kara from before he even learned she was Supergirl). Winn is a computer geek/wizard and a bit of a fashion nerd (Hey! Straight guys can be into fashion, too!).

Henshaw has maybe the biggest secret on the show (aside from Kara’s double life) and it’s a doozy – Harewood seems to be having a lot of fun playing mysterious in the early part of the season).

Finally, there’s James – who left Metropolis to become CatCo’s art director/photo editor. His motivation is simple – he doesn’t want to just be Superman’s pal Jimmy Olsen. For him, National City is a place where he can grow and advance his career. And, yes, he has a bit of a secret, too.

Supergirl’s first season has strong writing, terrific direction and a very talented cast. Its effects and makeup are first-rate (something that might suffer a bit in season two because lower budget on The CW) and its generally sunny disposition just feels right for the character.

Features: 10 Deleted Scenes; 2015 Comic-Con Panel (a disappointing 15 minutes); The Man from Mars; A World Left Behind, and a Gag Reel.

Supergirl: The Complete First Season – B+