Our hero is Joe lamb [Joel Courtney], Charles’ make-up effects specialist – a gig that connects him to the older [fourteen!] Alice [Elle Fanning]. The two share a connection hinted at in a subtly grim opening scene at a local steel mill and further set up by an incident at the wake for Joe’s mother – which is where we first meet Joe’s father, Deputy Sheriff Jackson Lamb [Kyle Chandler] and catch our first glimpse of Alice’s dad, Louis Dainard [Ron Eldard]. 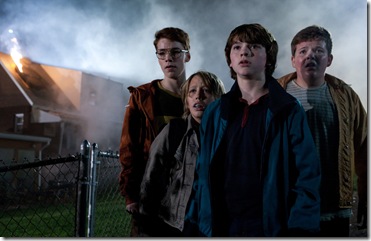 On this night, however, a truck pulls onto the tracks and causes a spectacular crash. While the kids flee the falling wreckage, Charles’ camera accidentally films something – a spider-like creature that is too far away to see well, but close enough to know that it’s not from around here. 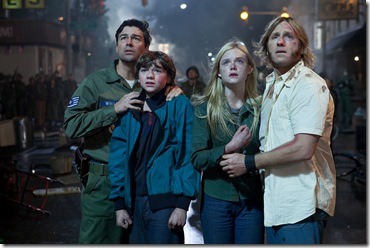 J.J. Abrams knows and loves movies, and here he takes the essence of Spielberg’s early films and filters it through his own sensibility and experiences as a kid moviemaker, to create a world that simultaneously fresh and familiar. He sprinkles jump moments – practical and effects – throughout the film but has the sense to make sure that our reactions are based not just on something jumping out and yelling boo! But also on our feelings for the characters.

If the final act walks the line between nostalgia, heart and the maudlin, Abrams has earned the right to pull off that balancing act from the instant he has Alice show off her acting skills at the train station. That’s one of the film’s most powerful moments – and it was that moment when I knew I was going to see Super 8 again.

One thought on “Super 8 Is Movie Magic!”