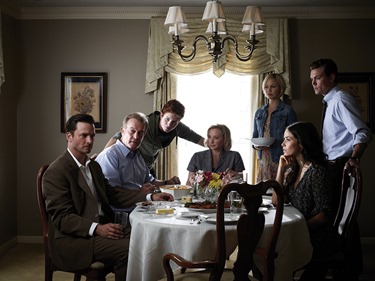 If you’re not a Whovian (Doctor Who fan) and want to check out something else that’s exceptional on November 23rd, try the Sundance Channel’s marathon of Rectify, its first original scripted drama, on Saturday, beginning at 2pm ET.

The series, about a man freed from death row after almost twenty years of complete isolation – and the effect that has on him, his family and all the people connected to his case, is one of the year’s most compelling dramas and will be featured on my own Favorite 15 list at year’s end. Check out the press release for further details.

NEW YORK November 8, 2013 – Sundance Channel’s original series “Rectify” will air in its entirety on November 23, 2013 beginning at 2:00pm. The six-episode hour-long series, created and written by Ray McKinnon (The Accountant, That Evening Sun, Mud) and executive produced by Mark Johnson and Melissa Bernstein (the Emmy Award® winning team behind “Breaking Bad”), premiered to rave reviews earlier this year and will return for a second season in 2014.

TV Guide, gave the series 10 out of 10 and hailed the series as “the most absorbing, unsettling and unexpectedly humane drama…on TV so far this year.” TIME agreed, declaring “Rectify” to be “one of the best things I expect to see on TV all year.” The Daily Beast called it “a breathtaking work of immense beauty and a thought-provoking meditation on the nature of crime and punishment, of identity and solitude, of guilt and absolution.  It is, quite simply the best new show of 2013.”  Damien Echols of the West Memphis Three reviewed the series for The Huffington Post, lauding it as a “powerful and realistic show which more than holds the viewer’s attention.”

When Daniel Holden (Aden Young) is released after nearly 20 years of complete isolation on death row, he returns as an outsider to his family, to his community, and to the times. Somehow, he survived the mental and emotional strain of his imprisonment, but now the walls have suddenly come crumbling down and Daniel is set free in a world he no longer understands. He’s an outsider, lost in a once familiar world, struggling to navigate his new found freedom. Combined with two decades of technological and social changes to his small town and the larger world, everything he encounters is a puzzle.

Daniel’s unexpected presence not only throws his family into disarray, it ripples out to all the people connected to his case – the prosecutor who rode the notoriety to become a State Senator, the Sheriff who pushed the boundaries of the investigation, and the entire town of Paulie, GA, that blamed him for killing one of their own. Like a deadly spark, Daniel’s release reignites the mystery, the power plays, and the questionable justice that condemned him.

Also starring in “Rectify” alongside Aden Young (Killer Elite, The Tree) as Daniel Holden are Abigail Spencer (“Burning Love”, Oz the Great and Powerful), who portrays Amantha Holden, Daniel Holden’s younger sister who believes completely in his innocence and has devoted her entire adult life to securing his release; J. Smith Cameron (“True Blood”, Margaret) who plays Janet Talbot, Daniel’s loving mother, who has been living with the impending death of her son for nineteen years, and who long ago had made peace with the loss of her son, giving up on any hope for his release; Luke Kirby (Take this Waltz, “Slings and Arrows”)  tackles the role of  Jon Stern, Daniel’s lawyer who works for an organization dedicated to exonerating the wrongfully convicted; Clayne Crawford (A Walk to Remember) portrays Ted Talbot, Jr., Daniel’s stepbrother whom he had never previously met; and Adelaide Clemens (“Parade’s End”, The Great Gatsby) plays Tawney Talbot, Ted’s kind-hearted wife; Bruce McKinnon (The Way Home) as Daniel’s step father Ted Sr.; Jake Austin Walker (The Chaperone) as Daniel’s half brother Jared; Michael O’Neill (Transformers) as Senator Roland Foulkes; and Hal Holbrook (Into the Wild) as Rutherford Gaines, Daniel’s former attorney.

After 19 years on Death Row, Daniel Holden is released due to new DNA evidence. He returns with his family to his childhood home, struggling to adjust to life on the outside. Meanwhile, the Senator who prosecuted him plots to reopen the case.

While Daniel explores town on his own, Amantha worries for his safety. Ted Jr. fears for the future of the family business and Senator Foulkes learns some valuable gossip from his secret lover. Unease and tension pervade Daniel’s welcome home party.

Daniel retreats from the stress of recent events as his return opens old wounds. Tawney reaches out to him, unbeknownst to her husband. Jon confronts Daniel’s original defense lawyer and Amantha fears the town’s anger may erupt any moment.

Janet’s day in town with Daniel becomes a media spectacle. Back on the case, Sheriff Daggett questions Trey Willis about a missing witness. Daniel and Tawney connect in unexpected ways.

Daniel loses his grip on reality as he wrestles with life after Death Row. Following a surreal night with a mysterious stranger, he finds himself at odds with Ted Jr. – who questions Daniel’s innocence.

As the town’s anger hits the boiling point, Daniel’s family goes on alert. Foulkes presses the D.A. for a retrial. Ted Jr. and Tawney recover from disturbing encounters. Trey Willis searches for the missing George Melton. Daniel must decide his future.