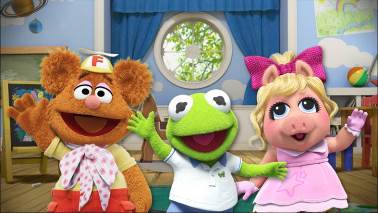 Production has begun on a new take (ie: reimagined) Muppet Babies for Disney Jr. – which will feature the playroom antics of Kermit the Frog, Piggy, Fozzie Bear, Gonzo, Animal and Miss Nanny.

Muppet Babies (Mark II) will debut in early 2018. Read on for details.

Disney has begun production on a reimagined “Muppet Babies” television series, which chronicles the playroom antics of the beloved Kermit the Frog, Piggy, Fozzie Bear, Gonzo, Animal and Miss Nanny. A co-production between Disney Junior, Disney Consumer Products and Interactive Media’s (DCPI) Content & Media group, and The Muppets Studio, the CG-animated series is slated to debut on Disney Junior in early 2018.

Nancy Kanter, executive vice president, Original Programming and general manager, Disney Junior Worldwide, said, “We are proud, and a little bit giddy, to begin production on our new version of the much-loved ‘Muppet Babies.’ Parents will delight in seeing their favorite Muppets in the mixed animation style they remember from the original series, and kids will be introduced to this warm and zany world made just right for the Disney Junior audience.”

Geared towards kids 4-7, each episode will feature two 11-minute stories that follow the Muppet Babies on various adventures – from building a time machine to flying through outer space – as they let their imaginations take them to the farthest corners of the universe. The stories are designed to highlight creative and critical thinking skills by harnessing the power and potential of imaginative play.

DCPI Content & Media and The Muppets Studio recognized the nostalgia, fandom, and demand for Muppet Babies by tapping into insights gleaned from their digital and social media channels and together they set the creative direction for the new series.

“Bringing ‘Muppet Babies’ to Disney Junior is a wonderful opportunity to reach a new generation of viewers and to creatively build on the innovative original series,” said Debbie McClellan, vice president, The Muppets Studio. “We hope to engage and delight the nostalgic fans while also entertaining new kids, parents and diverse audiences through heart and humor as only the Muppets can deliver.”

Disney Junior reflects the emotional connection generations of consumers have to Disney storytelling and Disney characters, both classic and contemporary. It invites mom and dad to join their child in the Disney experience of magical, musical and heartfelt stories and characters while incorporating specific learning and development themes designed for kids age 2-7. Disney Junior’s series blend Disney’s unparalleled storytelling and characters kids love deeply with learning, including early math, language skills, healthy eating and lifestyles, and social skills. In the U.S., Disney Junior is a daily programming block on Disney Channel and a 24-hour channel reaching over 73 million U.S. homes. In total, there are 35 Disney Junior channels in 27 languages around the world.

For over 60 years, the Muppets have entertained audiences of all ages with their unique blend of heart and humor. The creation of the late visionary Jim Henson, the Muppets are among the world’s most recognized and beloved characters. Since joining The Walt Disney Company in 2004, the Muppets have starred in award-winning feature films, television specials and movies, music videos and most recently, the ABC primetime series “The Muppets.” In addition, they have made hundreds of high-profile appearances, have their own attractions at Walt Disney World and are featured in a wide array of Muppet merchandise.

Disney Consumer Products and Interactive Media is the business segment of The Walt Disney Company that brings stories and characters to life through innovative and engaging physical products and digital experiences across more than 100 categories, from toys and t-shirts to apps, books and console games. DCPI comprises four main lines of business: Licensing, Retail, Content, and Games and Apps. The combined segment is home to world-class teams of app and game developers, licensing and retail experts, a leading retail business (Disney Store), artists and storytellers, and technologists who inspire imaginations around the world.