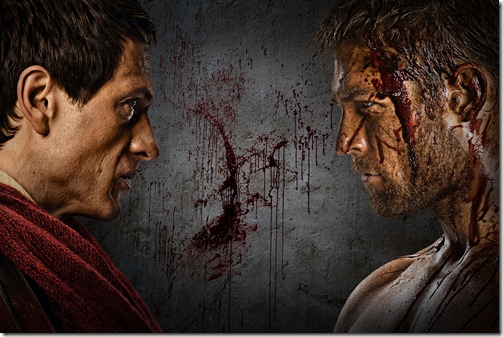 The final season of Spartacus (Starz, Fridays, 10/9C), subtitled War of the Damned, begins tonight with an episode called Enemies of Rome and finds Spartacus leading his rapidly growing army of rebels against a rapidly shrinking Roman detachment while others seek to persuade Marcus Crassus to finance and lead major offensive against them.

The final season of Spartacus finds the former slave rebels having gone from a distraction to a genuine threat. Spartacus’ (Liam McIntyre) unorthodox tactics and willingness to embrace fleeing slaves into his army wreaking havoc on the Roman forces he encounters – sparking a mission to Rome, where it is hoped that Marcus Crassus (Simon Merrells) will be persuaded to turn his keen mind and vast wealth into an army sufficient to rid the empire of the threat once and for all.

Enemies of Rome juxtaposes Spartacus’ actions with the introduction of the man history records as defeating him. Just as Spartacus refuses to sink to the level of the corrupt and ruthless Romans he has encountered so far, we see that Crassus is not the typical wealthy Roman slave owner – he values his slaves and treats them well (history tells us that his slaves included scholars and men of science – and that he charged dearly for their use by others as teachers).

We see him training with a slave who was a former champion gladiator and treating him almost as an equal; while his son Tiberius (Christian Antidormi) is more of the type with which Spartacus is more familiar. It is also clear that Crassus cares at least as much for house slave Kore (Jenna Lin) as he does his wife, while Kore seems to be the only slave that Tiberius shows any respect.

Though Enemies of Rome features a good of exposition in setting up what has happened since last season ended and what is to come, it not entirely bereft of wine, women and violence.

The encounters between Spartacus and the Roman forces he has decimated (and remember that word of later episodes) are more epic than anything we’ve seen on the show, thus far – but are minor in comparison to what lies ahead.

There are still nuances to be found in battle and in bed, but they are not so subtle as in the first two seasons of the show (and the prequel), though a unique relationship – between Agron (Daniel Feuerriegel) and Nasir (Pana Hema-Taylor) does seem to be doubling as a barometer of how the war is going. 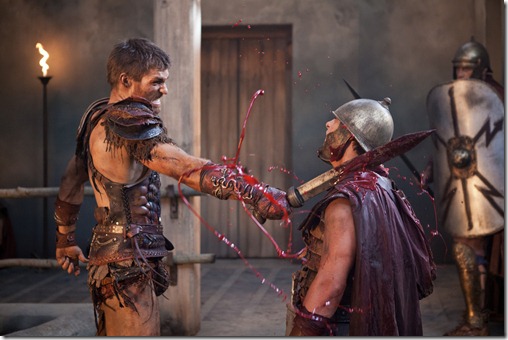 Besides those already mentioned, old friends like Crixus (Manu Bennett), Naevia (Cynthia Addai-Robinson), Gannicus (Dustin Clare) – who, oddly enough, seems to be functioning as conscience to Spartacus – and Saxa (Ellen Hollman) are also back. And, well into the ep, we meet the young Gaius Julius Caesar (Todd Lasance) – who immediately rubs Tiberius the wrong way.

Now, after three and a half seasons (between the series and prequel), the odd rhythms of speech used by the writers to denote the slight tone alien-ness of the culture of the times has become familiar and flows naturally as part of the overall design of the series. It is poetic yet efficient.

The action is both as exhilarating and as cringe-inducing as in past seasons, though it has grown by an order of magnitude. Spartacus: War of the Damned is even less for the squeamish than it was already – and the prudish should probably not bother trying to get on the bandwagon either. The sex is almost as plentiful as the violence.

While it has never quite blossomed into the top quality series that Starz intended, Spartacus: War of the Damned is flashy fun with warring factions that, at times, you can’t tell apart without a scorecard, morally speaking –especially in the next few episodes!

Still, even with its created grammar and extremes in violence, Spartacus: War of the Damned continues to be surprisingly accurate, historically, while maintaining its juggling act. There may be no history books telling that Caesar didn’t fight against the rebellious slaves, but there are none that say definitively that he didn’t.

The four eps that were made available to the press are among the best of the series, so far. They would also be rated R (at the very least; more like NC-17 because of the sex and violence). If you’ve come this far, don’t stop now. Things are finally coming to a head – and the show has never been more interesting.

One thought on “Spartacus: War of the Damned – The End Is Nigh!”