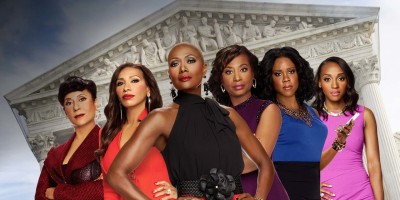 The tagline for We tv’s new unscripted docuseries Sisters In Law is ‘Drama is always in session.’

Sisters In Law follows a group of ‘elite black female attorneys as they tackle some of the toughest cases in Texas and leave no stone unturned in order to seek justice for their clients.’

As much as I’m not a fan of reality TV, this sounds intriguing. Sisters In Law premieres on WE tv on Thursday, March 24th (10/9C). Follow the jump to meet the counselors.

NEW YORK, NY, February 11, 2016 – WE tv is set to premiere the, unprecedented, unscripted docu-series, “Sisters in Law,” on Thursday, March 24 at 10:00 p.m. ET/PT.  Set in Houston, the 8-episode one-hour series follows a group of elite black female attorneys as they tackle some of the toughest cases in Texas and leave no stone unturned in order to seek justice for their clients.  In Texas, being a female attorney in a field dominated by men is hard enough but being a black female attorney is even harder. However, these strong-willed and strong-minded women, many of whom have been in each other’s lives for decades, are united by a professional and social group they have christened the “sisters in law.” Although close-knit they often find themselves allies one moment and rivals the next.  Ultimately, what keeps these women bonded is the common ground that they share – their race, their gender, the ability to win cases and an intense passion for the law – in a predominately white, male-dominated profession.

This season, viewers will get an inside look at how this group of dedicated lawyers juggle demanding careers, their families, political aspirations and busy social calendars while trying to maintain their friendships.

With egos as big as Texas, the “sisters in law” are often at odds with each other as they struggle to remain united under fierce competition and the intense pressure to succeed.

Rising from a childhood of poverty and a life filled with tragedy, Jolanda was driven to practice law in order to provide warrior justice for poor defendants. With a reputation for saying exactly what’s on her mind, Jolanda has won cases people thought were unwinnable and prides herself on client empathy, super preparation, on point research and cross-examining witnesses relentlessly so that the truth is revealed. Jolanda will legally attack people who attack her clients and will always strive to protect their civil rights. With all of her career accomplishments aside the one thing Jolanda is most proud of is her son, Jiovanni, who like his mother is a social activist. Jio was recently arrested and is facing charges, but Jolanda believes he is a victim of racial profiling and is doing everything she can to clear his name.

Vivian retired from her banking career after nine years and decided to become a lawyer. At 30, she went to law school and three years later graduated cum laude from Thurgood Marshall School of Law. She is the second black female to become board certified in criminal law in Texas. As a criminal lawyer who is the only one of the group to defend capital murder death penalty cases, Vivian considers herself the matriarch of the sisters and over the years has taken many of the ladies under her wing and mentored them – something she is passionate about since she never had a mentor herself.  With her outspoken personality, Vivian demands unconditional loyalty from the women she feels she has taught, something that doesn’t go over very well.

Rhonda is a civil attorney who specializes in class action lawsuits.  While working at a previous law firm, she sued for sexual harassment and won a large settlement, which she used to open up her own successful civil litigation practice.  A true dragon slayer, Rhonda has recovered more than $75 million fighting for the rights of everyday Americans against corporate giants and insurance companies and has even fought for her clients in cases that went all the way to the United States Supreme Court and won. She has very strong opinions on civil law versus criminal law, which causes a lot of friction amongst the women – many of whom are criminal attorneys. Rhonda is proud of the fact that she is self-made and sees nothing wrong with flaunting her wealth.

Juanita is a mixture of southern black culture – her mother was a wealthy debutante and her father was militant Black Panther from the other side of the tracks.  As a public defender, who has handled over 2500 cases, she enjoys standing up for those who aren’t able to stand up for themselves. Juanita and Rhonda were partners in a firm for 7 years until they realized that business and friendship didn’t mix and dissolved their partnership.

Monique, a criminal attorney, was originally interested in becoming a lawyer for the money but grew to enjoy the profession and the way she was able to help people get out of tough situations. Like the other women in the group, she is passionate about her work and gives clients her undivided attention. Deeply rooted in her faith, she will often pray with clients regardless of their spirituality and considers them family, often welcoming them into her home for dinner and bible study.  She is passionate about helping people get their lives back together, and when she doesn’t win a case, she is devastated.

Tiye is a civil attorney, specializing in intellectual property, who works for a huge law firm in Texas. After graduating from the University Of Texas School Of Law she was offered a position as an Associate in a southern law firm. Tiye, who is new to the group, is married to a well-known attorney.  In addition to practicing law, she is a fashion blogger for her blog, Fashion de Jure and participates in women’s empowerment organizations that provide inner-city girls with the tools to understand their brand of beauty and independence.