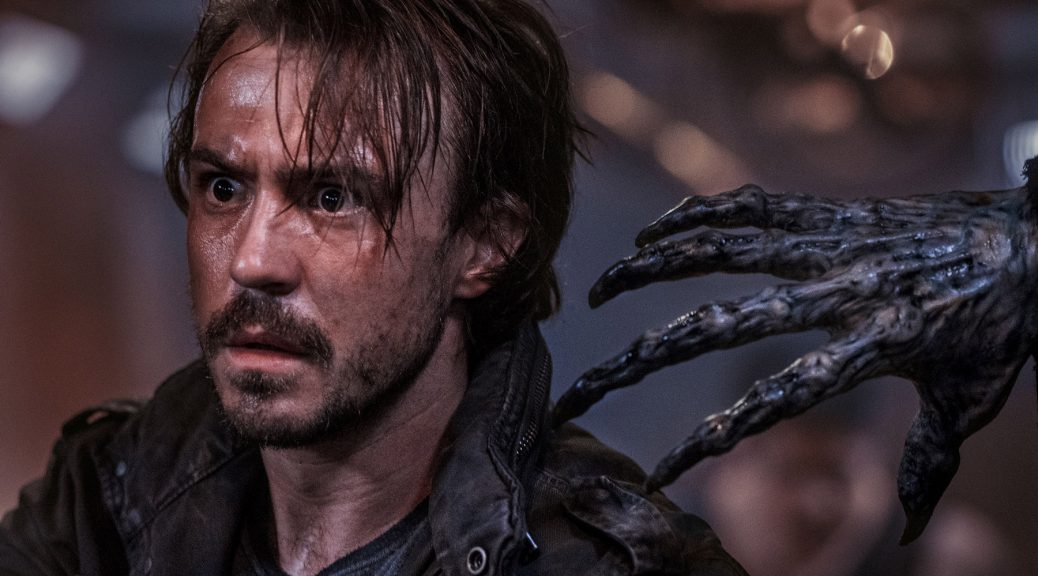 November on Shudder features something for everyone: stunning, martial-arts action horror in RE:BORN; an atmospheric noir thriller in the SXSW favorite A BLUEBIRD IN MY HEART; and wild demonic sci-fi/horror fun with NEKTROTRONIC from the creators of Wyrmwood. Plus, new library titles from horror masters Wes Craven, Dario Argento, George A. Romero and more. 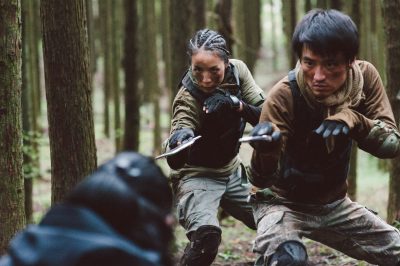 Toshiro, a former special forces operative, now lives a quiet life in the Japanese countryside. Despite his seemingly peaceful existence, Toshiro struggles to contain the destructive impulses that once made him the top soldier in an elite unit of killers. When his former commanding officer, the enigmatic Phantom (, comes out of the shadows seeking revenge, Toshiro goes on a kill-crazy rampage against a squad of ruthless assassins, with a dazzling display of close-quarters martial arts. Starring Tak (a.k.a. Tak Sakaguchi), Masaya Kato, Takumi Saitoh, Mariko Shinoda, directed by Yuji Shimomura. A SHUDDER EXCLUSIVE (Also available on Shudder Canada and Shudder UK)

A BLUEBIRD IN MY HEART (premieres Thursday, 11/14)

Danny, an ex-inmate in Belgium, is housebound in a small hotel with an electronic ankle bracelet as a condition for his parole. The hotel’s owner is more than willing to host former prisoners until they get back on their feet – she’s married to a convicted felon who is doing time and she knows how difficult it can be to re-enter society. She’s having a tough time raising on her own her daughter Clara, a diabolically beautiful teenager who is trying to get a bit too personal with Danny. He understands that the kid is looking for a father figure, but he has to help himself before he can help others. This hope for redemption is however soon shattered when Clara is assaulted, forcing Danny to face his old demons again. A SHUDDER EXCLUSIVE. Starring Rolland Moller, Lola Le Lann, Veerle Baetens, directed by Jérémie Guez. (Also available on Shudder Canada and Shudder UK) 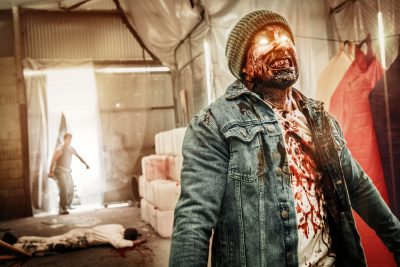 An outrageous new horror comedy from hell from the creators of Wyrmwood. Howard North, a down-on-his-luck sewage worker, gets dragged into a global conflict between the Nekromancers—a family of badass demon hunters—and Finnegan, an evil demon who absorbs people’s souls to increase her power. When Howard finds out the truth behind Finnegan’s past and her dark plans for the future, he teams up with his new friends to discover he is the ultimate Nekromancer, the only one with the power to defeat her and save the world. Starring Ben O’Toole, Monica Bellucci, Caroline Ford, Tess Haubrich, Epine ‘Bob’ Savea, David Wenham, directed by Kiah Roache-Turner. A SHUDDER EXCLUSIVE (Also available on Shudder Canada) 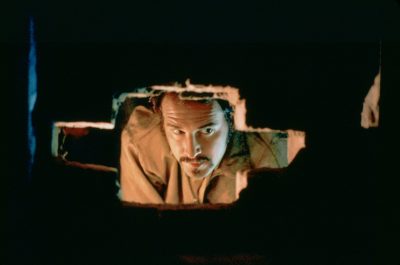 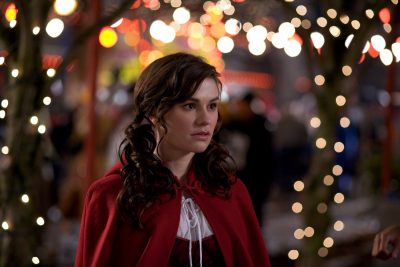 On the night when demons and tortured souls are free to walk the earth alongside mortal revelers, four tales of terror will make you laugh even while scaring you. Starring: Anna Paquin, Brian Cox, Dylan Baker, Leslie Bibb, Tahmoh Penikett 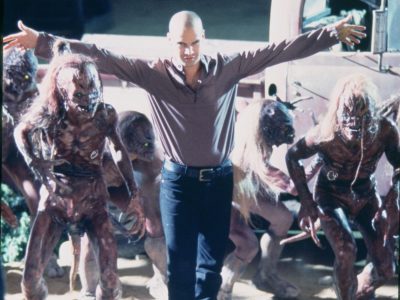 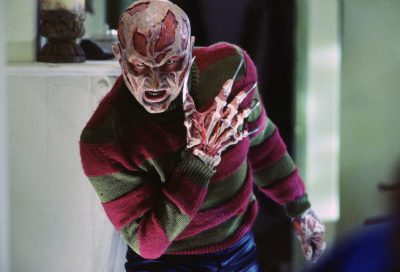 Ten years after writer and director Wes Craven brought his personal nightmares to the movie screen as Freddy Krueger in A NIGHTMARE ON ELM STREET, the horrifying child killer returns, stepping out of his celluloid world to haunt the life of the actress who first defeated him on film.  Starring: Heather Langenkamp, Robert Englund, Jeff Davis 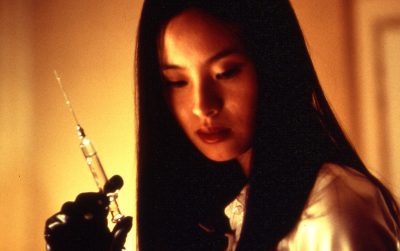 A man begins a relationship with a very deadly female killer in Takashi Miike’s ultra-gory masterpiece. Widower Aoyama falls for the radiant and mysterious Asami. But as he delves into her past, he learns her former acquaintances have either gone missing—or have missing limbs. Will he be next? If you haven’t seen it, be warned: when the needles come out, there’s no turning back…. Starring: Ryo Ishibashi, Eihi Shiina (Also available on Shudder Canada)

In this sequel to Stuart Gordon’s cult comedy horror, RE-ANIMATOR, Hebert West returns once again, ready to have another go at bringing the dead back to life. Aided by his assistant, Dr. Cain, the pair set about making their own Frankenstein’s monster from various female parts they find in the hospital morgue, attempting to make the perfect woman. However, things don’t go to plan when a local sheriff and hospital doctor attempt to thwart the duo’s plans in this screamingly funny parody of THE BRIDE OF FRANKENSTEIN.  Starring: Jeffrey Combs, Bruce Abbott, Fabiana Udenio (Also available on Shudder Canada and Shudder UK) 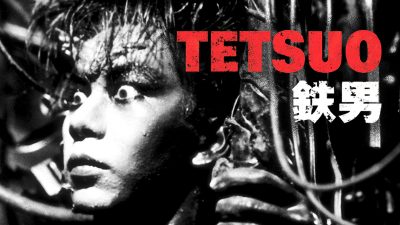 This surreal Japanese cult sensation profiles a man who mutates into a metal being. Somewhere between a modern-day nightmare and a techno-fetishist’s ultimate fantasy, this incredible film took viewers on a surreal journey into a dark and disturbing world where self-inflicted body transformations and post-human women form the fabric of a strange new reality. Starring: Tomorowo Taguchi, Kei Fujiwara, Shin’ya Tsukamoto (Also available on Shudder Canada and Shudder UK)

In Dario Argento’s fearsome follow-up to THE BIRD WITH THE CRYSTAL PLUMAGE, a blind man and a reporter investigate a series of slayings connected to a secret genetic facility. The sleuths quickly narrow it down to nine suspects, including the institute head’s beautiful daughter. But each time they get close to solving the crimes, the killer strikes again. Argento trademarks abound here, including stylized use of color during murder scenes, extreme eyeball closeups, and a Hitchcockian finale on a roof that echoes NORTH BY NORTHWEST.  Starring: Karl Malden, James Cranciscus, Catherine Spaak (Also available on Shudder Canada and Shudder UK) 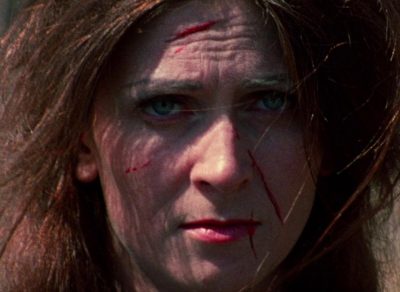 Season of the Witch  (Director: George A. Romero)

A bored, unhappy housewife takes up an interest in witchcraft after a chance encounter with an occult practitioner. Soon she finds herself drawn to the craft in ways that may be unlocking hidden powers—or perhaps is merely loosening her grip on reality. One of Romero’s most challenging, experimental works. Starring: Jan White, Raymond Laine (Also available on Shudder Canada and Shudder UK)

A social worker tries to rescue an adult baby from his very creepy family in this essential ‘70s cult classic. Ann is determined to help “Baby,” whom she suspects is being kept in his infantilized state by his mean mommy. But the more Ann tries to play miracle worker, the more she puts herself in grave danger. Mommy likes things just as they are! One of the weirdest horror films to come out of the 1970’s (and that’s saying a lot), THE BABY is the kind of twisted delight you flip out over – and then spend the rest of your life showing to friends. Starring: Anjanette Comer, Ruth Roman, Marianna Hill (Also available on Shudder Canada and Shudder UK)