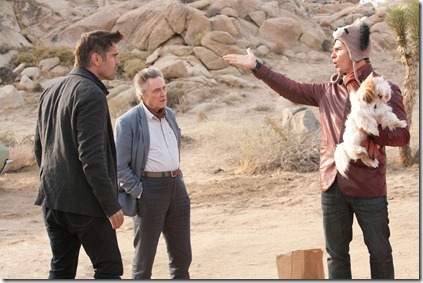 If you’re a screenwriter with a title for your next movie – Seven Psychopaths – and nothing else, what do you do? Let your best friend place a personal ad asking any psychopaths to come by and share their stories?

If you’re Marty, Martin McDonagh’s frustrated screenwriter, that’s got to be an option.

Marty (Colin Farrell) is the blocked writer in question; Billy (Sam Rockwell) is the best friend with the goofy idea. Zachariah (Tom Waits) is the serial killer who, with a female accomplice, seeks out and kills serial killers – and arrives at Marty’s home carrying a bunny.

Complications include Bonny, the Shih Tzu owned by the, why yes, psychopathic gangster Charlie (Woody Harrelson), that has been dognapped by Billy and his partner in crime, Hans (Christopher Walken); The Jack of Diamonds, a serial killer who is killing mobsters; Billy’s ex – who’s now living with Charlie, and, well many, many more. 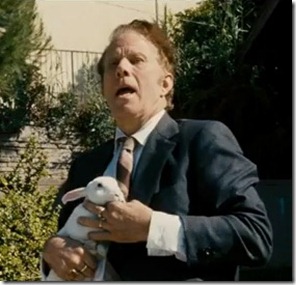 McDonagh is a playwright (The Pillowman) who moved into feature films with 2008’s In Bruges – a playfully brutal piece about an odd couple of hitmen laying low in the titular town after botching a job. It was critically acclaimed but didn’t become a hit until the DVD release.

Compared to Seven Psychopaths, In Bruges is cave paintings next to Michelangelo’s David.

As Marty struggles with his screenplay – ideas he’s toying with include the only survivor of My Lai and a vengeance seeking Amish Quaker – he also has to contend with Billy’s over the top pitching ( the Quaker is only Billy’s initial pitch); the very real possibility that Charlie will pursue a scorched earth policy with Marty and Hans, and the real connection between Hans and… but that would be telling.

McDonagh, the screenwriter, has fashioned a tale that so Meta that it should hurt, but so smoothly laid out that it doesn’t – except for possible whiplash as the audience reacts to it’s over the top violence and equally over the top comedy. 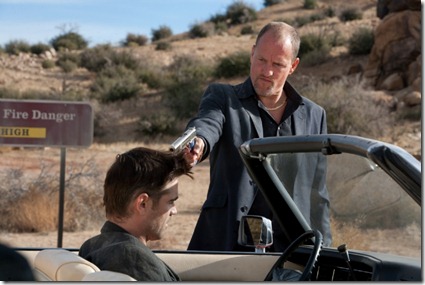 McDonagh, the director, moves his characters and plot elements around with an odd grace and alacrity. Seven Psychopaths is a fast-paced, violent romp that features the kind of near Shakespearean use of language that we last saw in David Chase’s legendary HBO western series, Deadwood and McDonagh steers the film in its circuitous path with a deft touch of a master.

Farrell is magnificent as the straight man/more or less normal guy in the center of the increasingly whacked out action; Rockwell excels as the best friend who may (or may not) go to ridiculous extremes to inspire his writer friend; Harry Dean Stanton’s cameo as the Quaker is a hoot, and Harrelson is formidably nuts as the gangster who has only ever cared for one thing in his life – his dog.

It’s Christopher Walken’s Hans, though who steals the movie with his odd cadences – playing the pacifistic dognapper as a loving husband who just doesn’t care if you point a gun at him. His performance may be one of the three or four best of his career because he knows exactly where the mix of weird and poignant works best and settles in there from the beginning. It’s great to be reminded of how good Walken can be when he’s given a real character to work with.

After In Bruges, which I’ve watched many, many times, I was expecting Seven Psychopaths to be a terrific movie. I wasn’t expecting it to be a brilliant work of demented genius.