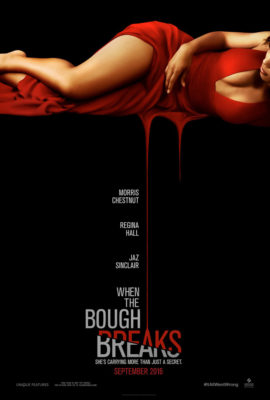 Fall is here! Whatever your interest in online movies, you’ll find at least one that suits you this September. We have quite a few intriguing movies to look forward to, from romantic thrillers to fantastical adventures, and even an explosive cowboy flick.

Check out these four upcoming falltitles: When the Bough Breaks, Miss Peregrine’s Home for Peculiar Children, Morgan, and The Magnificent Seven.

The film, When the Bough Breaks (a bough is a branch), is about a couple who want to have a baby. However, they are unsuccessful at “becoming pregnant” and enlist the help of a surrogate. A surrogate is a woman who volunteers to be inseminated to bear a child for the couple. Sometimes this is for compensation, and at other times this is to help a couple that is infertile.

As the pregnancy develops, Anna the surrogate mother (Jaz Sinclair) becomes psychotically fixated on seducing the husband and on pushing his wife out of the picture.  A romance thriller, most comparable to Enough(2002) with Jennifer Lopez and Glass House(2001) with Diane Lane.

This movie is a suspense, thriller about dangerous fixation.

Directed by Tim Burton, Miss Peregine’s is bound to be a wild, colorful tale of strange creatures and remarkable discoveries.

Jake is a young boy who discovers clues leading to a mysterious refuge known as the Home of Peculiar Children, run by Miss peregrine, a darkly charming woman. The “orphanage” styled home is a place between realities and times, where children with unusual abilities spend their time, and survive destruction. It is a teenage fantasy, drama with plentiful adventure and excitement.

It’s a lot like Harry Potter, X-Men and The Chronicles of Narnia: uncertain friendships, magic, flying, unexplained mysteries and strange creatures and people.  Young adults and teens will find something to enjoy in this one.

This movie is a suspense, adventure, fantasy about self-discovery and deception.

Perhaps the most thrilling movie of September has to be Morgan.

Amy (Rose Leslie) is a human science experiment that yields a tantalizing and deadly result. She’s a child with the capacity for telepathy and telekinesis…and murder.

The professional who is sent to resolve the chaotic situation is a troubleshooter (Kate Mara), a cool-appearing, logical woman who seeks to learn more about Morgan and how to help her.

The experimental subject, played by Rose Leslie, has an unusual expression that suits the character she plays. She’s unpredictable, emotional, powerful and yes, scary, quite scary.

It reminds us of Resident Evil and Silent Hill, with a bit of Silence of the Lambs. The aesthetic is cool, and the subject matter is eerie – the manipulation of the human organism using biotechnology.

This movie is a suspense, thriller, horror is about confronting fears and survival.

If you’re looking for a modern touch of cowboy action, look no further than M7 – a story about seven unusually skillful warriors. These men and women vow to help bring their form of justice to the people of the Old west. It’s a plotline familiar to class-film buffs –as it draws inspiration from a highly acclaimed samurai film from about 50 years ago and a western release of the same name.

A surprisingly cast Chris Pratt (Parks and Recreation), seamlessly joins the gun-slinging west as a bold cowboy, with Denzel Washington as an anchor to add hues of seriousness. Ethan Hawke is one of the good guys, playing character Goodnight Robicheaux. The cruel man-slaughtering industrialist (the antagonist), is played by Peter Sarsgaard.

It’s clear this film was inspired by the classic 1960’s film, The Seven Samurai – a tale about blade-armed warriors who are enlisted to save a town from destruction by its poor, helpless farmers.  However, it has more seriousness than humor in its presentation – the conflict takes precedence, as do the special effects and gunfire. Antoine Fuqua, director of Training Day, has brought his outlook to the classic remake.  Chris Pratt, thrown into the mix, helps to relieve some of that seriousness with an average-guy, cheeky charm.

This movie is an adventure, shoot’em up film that’s about the consequences of unhinged violence and revenge.

Whether you’re looking for a fun action flick or a suspense thriller, this September’s releases will have something for almost everyone.

The cowboy action flick Magnificent seven is oriented for adults while the fantasy adventure Miss Peregrine’s Home for Peculiar Children is suited for young adults and possibly children with parents. The eerie Morgan is R, so people that have watched Resident Evil and Silent Hill will probably find its suspenseful storytelling intriguing.