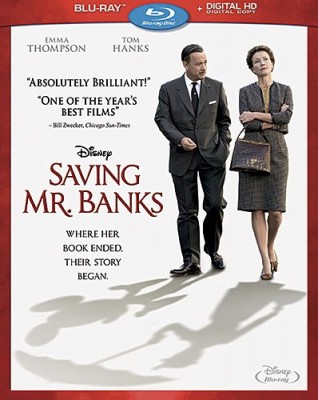 One of my favorite films of 2013, the criminally unappreciated Saving Mr. Banks is finally available on glorious Blu-ray.

After attending Disney’s excellent D23 presentation of upcoming films, Saving Mr. Banks quickly became one of the few films that I really looked forward to seeing. It has all the elements that I love in movies – heart, comedy, colorful cinematography and is about the creative process. That twenty-minute preview and surprise ending with the great Richard Sherman, Jason Schwartzman, and B.J. Novak doing a live performance of Let’s Fly A Kite was one the highlights of my year. The movie met and exceeded my expectations in every way.

I would say let’s start with the positives, but for me, this was a nearly perfect film. But an odd thing happened, I actually watched Mary Poppins (for the first time) after I saw the film and it made me rethink everything.  It turns out the movie that I dearly love is nothing more than a propaganda piece that was designed to make Walt Disney out to be a saint and I bought into it hook, line and sinker. 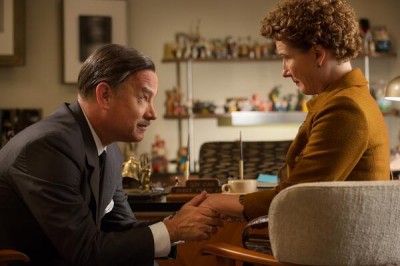 In many ways I wish I stayed ignorant and never watched Poppins.  It is nearly impossible to properly comment on Banks without taking into consideration that the film actually makes you root for author P.L. Travers (Emma Thompson) to get her way in her battles with the affable Walt Disney (Tom Hanks). The film even leaves you believing that this really was a partnership and that ultimately Travers was happy with the finished product. Every thing that Travers complains about in Banks is actually in Poppins so there’s no way she would have been happy with the end result.

Travers was a very difficult woman who loved her creation to death. After denying Walt for 20 years, she hit a bit of financial trouble. Even though she needed the money Travers wasn’t going down like a wilted flower. Watching the prickly Travers stand up up against Walt’s charm was a joy. She took great pleasure in getting figuratively poking him. He insisted on people calling him Walt and she called him Mr. Disney because she knew it got under his skin.  I’m not the biggest Hanks fan around but he does a fabulous job here. He covers up his growing irritation with an affecting smile and laughter. 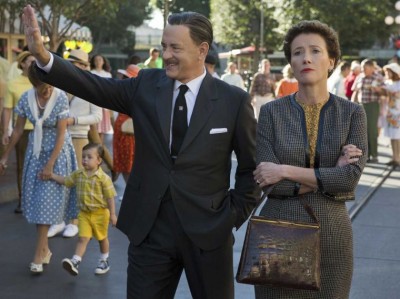 Emma Thomas is one of those great actresses that we just don’t see enough of. She is absolutely stellar in this. While Travers can easily come across as one note, Thomas plays her deadpan, dry wit, brilliantly. You can see the deeper, repressed emotions behind her every action and statement and this is helped by Bank’s brilliant story structure.

Travers’ disdain for the Sherman Brothers was a joy to watch. It’s hard not to feel sorry for them, they are doing everything they can to make someone who will never be happy, smile and respect them. In one scene she asks Bob Sherman (B.J. Novak) why he walks with a limp and he says “I was shot in the war,” and Travers deadpan response “I’m not surprised” was flawless. It is fun watching her relationship with her driver Ralph (Paul Giamatti) grow throughout the film. 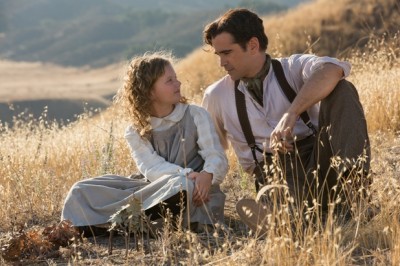 Director John Lee Hancock takes Kelly Marcel, & Sue Smith script to weave a story that effectively uses flashback scenes to tell a story within a story. We see how Mary Poppins came to be and why she is so important to Travers. Her childhood dreams shatter when she realizes that her father (Colin Farrell) is a drunken dreamer who will never, ultimately be good for his family and her mother (Ruth Wilson) is someone who cannot cope with raising kids on her own. Colin Farrell and Ruth Wilson are amazing as Travers’ parents.

In many ways Saving Mr. Banks is the ultimate Disney film and embodies everything the company sort of stands for. But that is also the film’s ultimate downfall. It doesn’t get too critical of Walt and as I said in the beginning, it is a brilliant piece of propaganda film making, that will make some fans of Travers angry.

Nothing to say here, the audio and video transfer is excellent, although I wish there was a widescreen presentation option. I’m so tired of letter boxing, I have a 60-inch TV, I want every inch of my screen real estate filled up with beauty. Not distracting black bars.

The only extra on this Blu-ray worth mentioning is a 14 Minute documentary that explores the history behind Disney’s fascination with Mary Poppins and how the film came to be. It’s a nice little featurette, but it would have been nice to have a more in-depth look at Walt and Traver’s history and the production of Poppins and this film.

What is going on with Disney Home Video? They release two of their biggest films of last year on the same day and both releases are severely lacking in extras and feel rushed. While I’ll always prefer physical media over digital, considering Disney recently jacked up the prices on their discs, it’s really hard to recommend this over just buying a digital download.

Which is probably their plan, mark my words in the coming year they are going to do everything they can to drive people away from more expensive physical media – even though they aren’t passing the savings in going digital to customers. Don’t even get me started on how ridiculous it is to pay $22 for digital only versions.