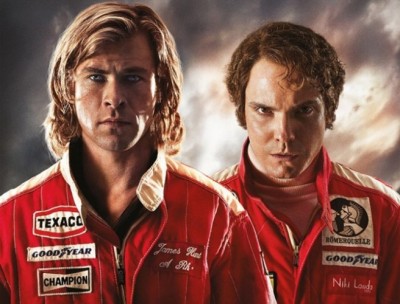 In the early to mid 70s one of the biggest sports in the world was Formula 1 racing. At the top of the heap was the rivalry between James Hunt and Niki Lauda. Producer, Director Ron Howard has crafted a portrait of not only the relationship between the two but what it must have been like to attend an Formula 1 Racing event in the 70s. The movie features some of the best racing scenes ever put to film but it still feels like it’s lacking something.

This is purely superficial on my part, but the casting felt odd to me. I could never seem to get past how much Chris Hemsworth’s James Hunt looked and acted like Heath Ledger and Daniel Brühl ’s Niki Lauda channeled a lot of of Ray Liotta. Howard seemed to be more concerned with filming the racing sequences – almost the entire film is comprised of a series of races, than really exploring the characters beyond at a “superficial.”  Both actors came across as a bit stiff.

While I say there’s not enough of either character, we do find out enough about them to determine that neither guy is particularly likable and not someone that you want to root for. Hunt was British but he is portrayed as a long haired, arrogant “surfer boy” who only cared about racing and beating Lauda. The film primarily focuses on Hunts journey and through this, it feels like the rivalry is purely one sided. Hunt initially takes a disliking to Lauda because he beat him in F3. Then is upset to find out that Lauda “bought” his way into the F1 circuit instead of “earning” it like he had to. 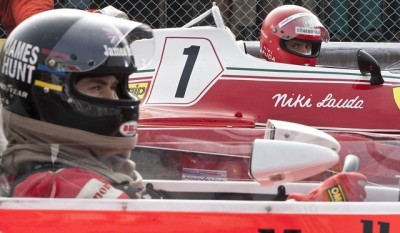 It didn’t help that Lauda was a cold, insensitive guy who only had a passion for the business side of F1 racing. He calculated the odds of having accidents and knew how to design cars so that he would have a better chance of winning, but he never seemed to show a true passion for “racing.” Hunt says several times the film that great racers have to be “Willing to die” and “lay it on the line.” It’s why he lived his life so recklessly. While Lauda was only in it for the money and an opportunity to show up his domineering father.

Some of the racing sequences in this film are truly spectacular and well thought out. I wish he used more full frame, long shots so we could have a better view of the scope and scale of the racing. Howard uses a lot of zoomed in quick shots of the racers faces, gear shifts, spinning tires and chrome wheels. The first few times you see it, it is pretty awe inspiring you can’t help but admire these guys for as one says “racing with a bomb strapped to your back.” I just wish there was somehow he could vary the racing sequences a bit more. Hans Zimmer‘s score is fun and gives the movie a bit of oomph. 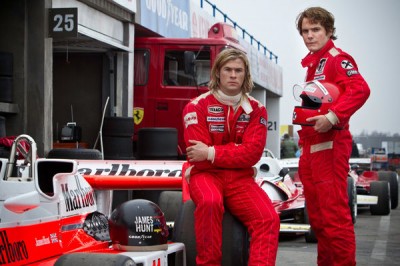 Alexandra Maria Lara’s had one of the more interesting performances here as the quiet, unassuming Marlene Lauder. On the one hand I wanted her to have more to do in the film other than stand there and look concerned, but her presence actually served to humanize Lauda a bit. We do get a brief glimpse at Hunts relationship with his women and eventual wife Suzy Miller, but Olivia Wilde isn’t given much to do except be eye candy for a couple of scenes.

For all of its faults Rush is an interesting glimpse into F1, but I walked out thinking that I had watched a brilliantly filmed 2 hour commercial for F1 Racing and not a movie about people that I ultimately cared anything about. Much like its lead characters it felt a little cold and calculating.