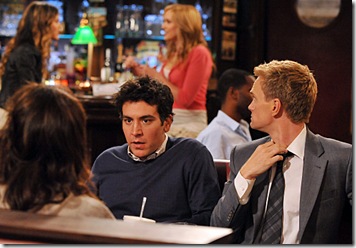 Subplots involve Marshall’s inability to keep anything from his dad [Bill Fagerbakke] and Ted’s getting up the courage to approach the girl at the bar – whom he suspects might be Cindy’s [Rachel Bilson] mysterious roommate [the one he never more than glimpsed – despite Barney calling dibs [Barney’s like a shark that way…].

Marshall, Lily and Barney [as usual] get most of the big laughs here, but Ted gets a few shocking moments and creeps a bit closer to meeting his future wife [it involves a wedding, but not one we get to see…].

Written by Carter Bays and Craig Thomas, Big Days does what HIMYM does best – balance the blunt object behavior of Marshall, Barney and Robin against the [slightly] more subtle behavior of Ted and Lily. The Marshall/Lily arc culminates in Marshall coming to a realization concerning his father [a true D’OH! Moment], while the Ted/Girl at the Bar arc ends with an even bigger revelation. Both are incredibly funny for completely different reasons – and they bracket a really sweet Robin moment that takes Barney’s measure and goes one better.

Pamela Fryman does a great job of hitting the character beats as hard as the punchlines, resulting in an episode that gives the humor its necessary emotional resonance.

My only problem with Big Days is that it didn’t include Chuck Lorre’s closing credits vanity card. Those things are frequently as funny as the eps they follow.