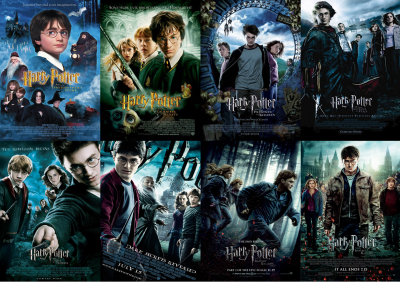 Dust off your Sorting Hats and stock up on butterbeer! Freeform will be continuing what has become a magical tradition – airing the entire Harry Potter movie series – beginning on Friday, March 14th and continuing through to Sunday, March 16th.

Looking to escape the muggle world? Freeform is giving you the perfect chance to invite your friends over for a game of Quidditch and some butterbeer as Harry transforms from a muggle to the “Chosen One.” So, dust off your Sorting Hat and tag along with Harry, Ron and Hermione as they discover the power of magic and friendship, starting on FRIDAY, MARCH 4 and continuing through SUNDAY, MARCH 6.

Based on J.K. Rowling’s popular novels about the boy who lived, “Harry Potter and the Sorcerer’s Stone” introduces fans to Harry Potter (Daniel Radcliffe) who learns on his 11th birthday that he is the orphaned son of two powerful wizards and possesses unique magical powers of his own. Invited to attend Hogwarts School of Witchcraft and Wizardry, Harry embarks on the adventure of a lifetime. At Hogwarts, he finds the home and family he has never had. “Harry Potter and the Sorcerer’s Stone” repeats on Saturday, March 5 at 7:00 a.m. EST.

More adventures await Harry when he returns to Hogwarts for his second year. Chilling, malevolent voices whisper from the walls only to Harry and it seems certain that his classmate Draco Malfoy (Tom Felton) is out to get him. Soon it’s not just Harry who is worried about survival, as dreadful things begin to happen at the school. The mysteriously gleaming foot-high words on the wall proclaim: “The Chamber of Secrets Has Been Opened. Enemies of the Heir, Beware.” But what exactly does it all mean? Harry, Hermione (Emma Watson) and Ron (Rupert Grint) risk their own lives to solve this 50-year-old, potentially deadly mystery. “Harry Potter and the Chamber of Secrets” repeats on Saturday, March 5 at 10:45 a.m. EST.

Harry, Ron and Hermione return for a third term at Hogwarts School of Witchcraft and Wizardry. But Harry’s fate looks bleak when the infamous Sirius Black (Gary Oldman), who was convicted of killing 13 people with a single curse, escapes from prison. The only clue to where Sirius is headed: The Azkaban guards heard Black muttering in his sleep, “He’s at Hogwarts…He’s at Hogwarts.” Even within the walls of his magical school, Harry may not be safe from a convicted killer. “Harry Potter and the Prisoner of Azkaban” repeats on Saturday, March 5 at 2:45 p.m. EST.

The fourth movie in the Harry Potter franchise sees Harry returning for his fourth year at Hogwarts School of Witchcraft and Wizardry, along with his friends, Ron and Hermione. There is an upcoming tournament between the three major schools of magic, with one participant selected from each school by the Goblet of Fire. When Harry’s name is drawn, even though he is not eligible and is a fourth player, he must compete in the dangerous contest. “Harry Potter and the Goblet of Fire” repeats on Sunday, March 6 at 7:00 a.m. EST.

A summer has passed since Harry’s encounter with the Dark Lord (Ralph Fiennes), and Harry returns to learn that the wizarding community remains in denial about Voldemort’s return. The minister of magic believes that Headmaster Dumbledore (Michael Gambon) is lying and assigns a member of his staff, Dolores Umbridge (Imelda Staunton), to be the new Defense Against the Dark Arts teacher. When her Ministry-approved course leaves the young wizards woefully unprepared to protect themselves against the dark forces threatening them, Hermione and Ron urge Harry to take charge. Meeting secretly with a small group of students who name themselves “Dumbledore’s Army,” Harry teaches them how to defend themselves against the Dark Arts and prepares the courageous young wizards for the extraordinary battle that lies ahead. “Harry Potter and the Order of the Phoenix” repeats on Sunday, March 6 at 10:30 a.m. EST.

Harry returns to Hogwarts for his sixth year and faces a growing danger that may be more than a match for his strengthening powers as a wizard. While Death Eaters emboldened by the return of Lord Voldemort wreak havoc in both the muggle and wizarding worlds, Harry suspects new dangers lie within Hogwarts. Dumbledore, racing to prepare Harry for a battle that he knows is fast approaching, brings him on a perilous mission to find the key to unlock Voldemort’s defenses. Meanwhile, the students face a different adversary as teenage hormones rage: Harry’s friendship with Ginny Weasley (Bonnie Wright) grows into something deeper; Lavender Brown (Jessie Cave) lavishes her affections on Ron, while Hermione simmers with jealousy; and a box of love potion-laced chocolates ends up in the wrong hands.

In the first part of the seventh and final adventure, Harry, Ron and Hermione set out on their perilous mission to track down and destroy the secret to Voldemort’s immortality and destruction — the Horcruxes. On their own, without the guidance of their professors or the protection of Dumbledore, the three friends must now rely on one another more than ever. Meanwhile, the wizarding world has become a dangerous place for all enemies of the Dark Lord. The long-feared war has begun and Voldemort’s Death Eaters seize control of the Ministry of Magic and even Hogwarts, terrorizing and arresting anyone who might oppose them. Little does Harry know that his future has already been decided by his past when, on that fateful day, he became “the Boy Who Lived.” No longer just a boy, Harry Potter is drawing ever closer to the task for which he has been preparing since the day he first stepped into Hogwarts: the ultimate battle with Voldemort.

The motion picture event of the generation comes to a close in the second part of the final chapter in the monumental Harry Potter series. The boy wizard’s adventure concludes with the climactic final battle between “The Boy Who Lived” and Lord Voldemort. Making their final stand upon the ramparts of Hogwarts School of Witchcraft and Wizardry, Harry, Ron and Hermione face their greatest foe and make the ultimate sacrifice.