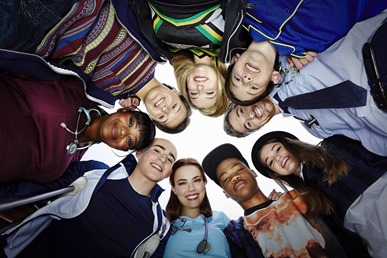 Fans of FOX’s new drama, Red Band Society, have raised $100,000 for the network’s charity partners – Cystic Fibrosis Foundation, Ryan Seacrest Foundation, St. Jude Children’s Research Hospital, Teen Cancer America, and Children’s Hospital Los Angeles. In the process, they have unlocked online access to the show’s premiere on HULU.com, fox.com and FOX NOW, as well as many other platforms. The window for the advance look at the premiere is from now until Tuesday, august 26th.

Red Band Society ‘is a provocative, unconventional and unique coming-of-age dramedy about a group of rule-bending friends and the adults who mentor them through the ups and downs of adolescence in Los Angeles’ Ocean Park Hospital.’ The series premieres on Wednesday, September 17th. For more, follow the jump.

“RED BAND SOCIETY” FANS BANDED TOGETHER TO HELP FOX RAISE $100,000 FOR CHARITY PARTNERS AND UNLOCK THE DEBUT EPISODE, AVAILABLE TO WATCH NOW FOR FREE ON HULU, FOX.COM, FOX NOW, FOX ON DEMAND AND MANY OTHER PLATFORMS

Visit myredbandsociety.com for fun videos, photos, GIFs and MORE that you can share with your friends.

RED BAND SOCIETY, starring Academy Award-winning actress Octavia Spencer (“The Help,” “Fruitvale Station”), Dave Annable (“Brothers & Sisters,” “666 Park Avenue”) and a charismatic cast of fresh faces, is a provocative, unconventional and unique coming-of-age dramedy about a group of rule-bending friends and the adults who mentor them through the ups and downs of adolescence in Los Angeles’ Ocean Park Hospital.

Twelve-year-old narrator CHARLIE (Griffin Gluck) is in a coma and introduces us to this band of unlikely friends, including the “new kid,” JORDI PALACIOS (Nolan Sotillo), a 16-year-old who comes to California to seek out treatment at the renowned hospital. What Jordi soon discovers is that it’s not his illness that’s going to change his life, but his new friends. Also at Ocean Park is LEO ROTH (Charlie Rowe), the 16-year-old, charming and independent “leader” of the group. Leo’s best friend is DASH HOSNEY (Astro), a 16-year-old “rebel” with a big personality, who is determined not to let his cystic fibrosis stop him from living his life. Also on the ward is 15-year-old “know-it-all” EMMA CHOTA (Ciara Bravo, “Big Time Rush”), Leo’s on-again-off-again girlfriend who is coping with an eating disorder. Rounding out this group of patients is KARA SOUDERS (Zoe Levin), a “mean girl” cheerleader who shares a room with Charlie. Although her heart is failing, she is realizing for the first time that she actually has one and begins opening it up to her new friends.

These teens form a life-changing bond and singular kinship, represented by their red hospital bands. They face shared experiences, both uplifting and challenging, tragic and comedic, ordinary and out-of-the-ordinary – and they do it together. When you’re brought to the brink, that’s when you laugh the loudest, love the strongest and cry the hardest…This is the story of the RED BAND SOCIETY.