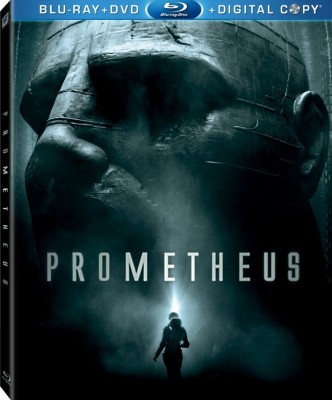 One of the Summer’s most anticipated movies is now available on Blu-ray. To many it set the high-watermark for sci-fi blockbusters, for others it was a plodding mess. How does it do removed from all the hype and in a home setting? Michelle has your answer. 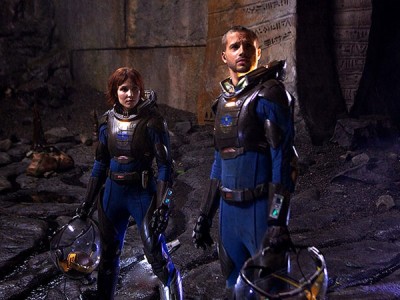 Now we have Prometheus a movie that is set in the Aliens universe, but not really.  There are a lot of similarities in terms of look, feel, tone, but the connection that fans may be looking for really don’t seem like its there. You can watch this movie without knowing anything about the world of Aliens. It has been awhile since I watched my Aliens Blu-ray collection, so I walked into this sort of “cold.”

While intensely watchable and at times actually engrossing about halfway through this exercise the sinking feeling of hopelessness sets in. That it is a waste of time and nothing is really going to be answered. The movie asks “big” questions, or at least claim to be, but it is more shallow pop psychology.  “What would you do if you could meet god and ask him “Why he created you?”  Ok. Yeah, and?  The movie just poses the question, but there really is no debate about what would be asked or how it would impact the person asking. 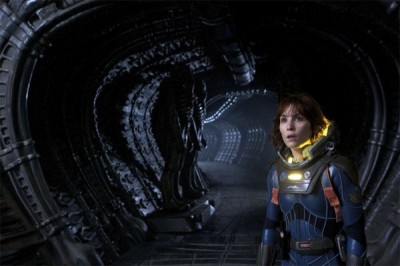 The 3D for a change does not hurt the movie. I still do not buy into the B.S. that 3D is only good for “depth.” I want my 3D to pop out at me and be over the top like Piranha 3D or the Final Destination movies, I don’t want pointless “depth.” The opening sequence, which is incredibly stupid and actually pointless, is beautifully filmed in 3D. The first time we get a full shot of the Prometheus is awe inducing, but these nice 3D moments are few and far between.
As someone who isn’t a fan of the Alien franchise (I enjoy them, just don’t think they are great movies), Prometheus feels like a competent, but pale imitation of those far superior films.

The Blu-ray quality here is sharp and clear with no artifacts. However the muted colors of the cinematography doesn’t make the picture quality stand out from the crowd.  The menu navigation is simple, easy to use. Not too pleased with the overly small purple/black fonts against the light blue color tone. Makes it a little hard to read – even on a 55 inch TV.

14 Deleted Scenes and Extended Scenes that Total 36 Minutes – These are finished scenes and actually do add more depth to the story. I would still like to know why she flew across the Universe with a medical pod that only works with Men! Can you say Director’s Cut?

The Peter Weyland Files – Is a pretty interesting series of clips that shows more detail history on members of the crew, their training and selection process.

Prometheus – Weyland Corp Archive – This is a second screen App for iOS and Android devices that provide a lot more context to various scenes.

Digital Copy – This set get extra points for providing viewers a choice in formats. You can use either that new finagled Ultraviolet Service or/and a basic iTunes transfer. Me I always just go with both – why not?

BD-Live Extras – Provide Connectivity to download updated trailers and other materials (mostly Trailers). I hate using BD-Live, it usually its pointless to download or stream trailers for a movie that I just finished watching and frankly most of the trailers available through BD-Live are already on the disk. The worst part is, BD-Live always seems to break navigation – once you enter into it, you have to restart the disc to be able to get back to the movie.

My review is based on the theatrical release, while it didn’t work for me in a big screen environment – perhaps I lacked the patience for it, it does work a lot better on Blu-ray. The visuals are even more stunning in a nice Home Theater environment. Despite my reservations about the movie this is a well thought out and put together package. If you liked the movie in the theater this is a no-brainer. It is worth another look for the rest of us.