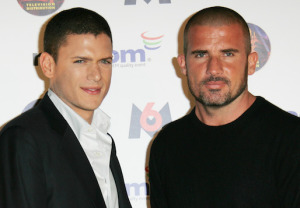 When Prison Break returns – with its headliners: Wentworth Miller and Dominic Purcell aboard – it will be, as FOX, puts it, the ‘ultimate escapist event.’

Beyond that, though, details were scarce – though the original series’ producing team – Paul T. Scheuring, Neal Moritz, Matry Adelstein and Dawn Olmstead will be returning to helm the show. For the few remaining details available at this time, follow the jump.

FOX has ordered a thrilling new event series based on its hit series, PRISON BREAK, it was announced today by Dana Walden and Gary Newman, Chairmen and CEOs of Fox Television Group.

An immediate critical and ratings hit when the original series premiered in the fall of 2005, the new event series will hit the ground running, reuniting series stars Wentworth Miller and Dominic Purcell as brothers MICHAEL SCOFIELD and LINCOLN BURROWS.

The original action drama PRISON BREAK centered on a young man (Miller) determined to prove his convicted brother’s (Purcell) innocence and save him from death row by hatching an elaborate plan to escape from prison. A breakout success in its premiere season, garnering Golden Globe Award nominations for Best Television Series – Drama and Best Performance by an Actor in a Television Series – Drama (Miller), as well as winning the People’s Choice Award for Favorite New TV Drama, PRISON BREAK thrilled audiences for four heart-pounding seasons, ending its run in May 2009.

Additional details on the new event series will be announced at a later date.

The series will be produced 20th Century Fox Television. Paul T. Scheuring, Neal Moritz, Marty Adelstein and Dawn Olmstead will serve as executive producers. “Like” PRISON BREAK on Facebook at facebook.com/prisonbreak. Follow the series on Twitter @PrisonBreak and join the discussion using #PrisonBreak. See photos and videos on Instagram by following @PrisonBreak.