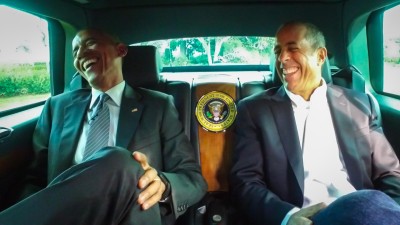 OTHER GUESTS WILL INCLUDE WILL FERRELL, STEVE MARTIN, GARRY SHANDLING, KATHLEEN MADIGAN AND SEBASTIAN MANISCALCO

CULVER CITY, Calif. (December 21, 2015) – Crackle, Sony’s free streaming network, today announced that President Barack Obama will be the first guest in the new season of Jerry Seinfeld’s “Comedians in Cars Getting Coffee” with an earlier-than-expected premiere date. Season 7 will premiere on Wednesday, December 30 at 11:30PM ET on Crackle and comediansincarsgettingcoffee.com. Other Season 7 guests will be Will Ferrell, Steve Martin, Garry Shandling, Kathleen Madigan and Sebastian Maniscalco.

The episode featuring President Obama was shot at the White House earlier this month, and features both the President and Seinfeld driving a 1963 Corvette Stingray Split Window Coupe, and talking about life in the White House over coffee.

Jerry Seinfeld said: “Growing up in the ’60s my kid dream was always to be an astronaut—doing a comedy show with President Obama in and around the White House felt like going into space.

‘How did I get here?’ ‘Is this really happening?’ The President’s humor and generosity are the only reasons this was even possible. He was so easy and fun to be with. Being President and just a cool guy to hang out with at the same time made the experience my own personal moonwalk. It was an unforgettable day.”

Eric Berger, Crackle GM and EVP Sony Pictures Television Digital Networks said: “Like everything else Jerry Seinfeld does, he has managed to break records with ‘Comedians in Cars Getting Coffee’ – we’re so proud of this season that we just couldn’t wait until the New Year for people to see it.”

The seventh season of “Comedians in Cars Getting Coffee” will be comprised of six episodes, with a new episode streaming every Wednesday night at 11:30PM ET. Sponsored by Acura, the series is executive produced by Jerry Seinfeld and Embassy Row. Seasons one through six are currently streaming on Crackle.