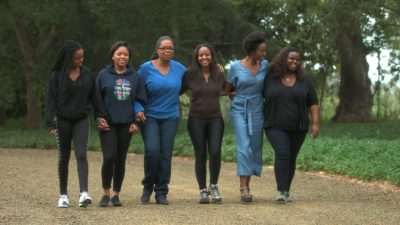 O Girls, a documentary showing the power of a single opportunity to change the lives of five young women, will premiere on Fusion on Sunday, January 15th (8/7C).

The five girls featured in the film are with the first graduating class of the Oprah Winfrey Leadership Academy for girls – the film finds them on the cusp of their next milestone: college graduation.

Check out the trailer following the jump.

FUSION’s Kimberly Brooks Reunites with the First Graduating Class of the Oprah Winfrey Leadership Academy for Girls as They Achieve Another Milestone: College Graduation

”I wanted to help girls who really wanted it. They could see the possibility for themselves, if only. If only they had the means to do it.” — Oprah Winfrey to FUSION’s Kimberly Brooks

Tune in for the premiere of FUSION’s new, one-hour special, “O Girls,” which documents the personal journey of five girls from the inaugural graduating class of the Oprah Winfrey Leadership Academy for Girls. Airing on Sunday, January 15 at 8:00 PM, the stories showcased personify how access to education can empower young women and girls all over the world to do incredible things. Viewers will get a one-of-a-kind experience as host Kimberly Brooks – a former Harpo staffer and now Fusion correspondent – sits down with inspiring television host and philanthropist, Oprah Winfrey, to discuss a wide range of topics, including: Why Oprah started the Academy, what Oprah’s relationships are like with the girls who attended the Academy and why Oprah chose Kim to visit the school with her almost a decade ago.

Each of the stories showcased in “O Girls” personifies how education can empower young women and girls all over the world to do incredible things. While access to education has enriched the lives of the young women who graduated from the Leadership Academy, the documentary also delves into the challenges that come along with such a life-altering opportunity. In an interview, Winfrey notes that on average many of the girls had experienced six major life traumas before even coming to the Academy – from violence and sexual abuse to dealing with the deaths of several family members. Kimberly Brooks talks with OWLAG graduates Bongeka, Thando, Charmain, Debra and Mpumi about dealing with those traumas at a young age, as well as the personal pressure to succeed after life at the Academy and the challenge of balancing their lives in the U.S. with their South African roots.

Through impactful journalism and smart commentary, FUSION covers the stories that matter to the rising American mainstream. FUSION content is available to audiences across a broad range of platforms including cable television (channel listings), FUSION.net, various OTT providers and social media platforms. Follow us on Facebook, Twitter, Instagram, and YouTube. FUSION is a part of the Fusion Media Group, a division of Univision Communications Inc.

Kimberly Brooks is a FUSION correspondent and the co-anchor of ‘Nightline on Fusion.’ As a correspondent, Kimberly contributes regularly to FUSION’s “AMERICA with Jorge Ramos” and the upcoming series “Outpost.” Prior to joining FUSION in 2014, Kimberly spent eight years working in television production – beginning at “The Oprah Winfrey Show,” then moving on to produce for NBC’s national lifestyle programs in Chicago where she won two regional Emmys with her team. Later, she moved to New York, working as an ABC News fellow – producing stories for “World News with Diane Sawyer,” “Good Morning America” and “Nightline.” Kimberly holds a degree from Northwestern University and received her M.S. in Journalism from Columbia University where she graduated with honors.

Photo of Oprah with the girls courtesy of Fusion