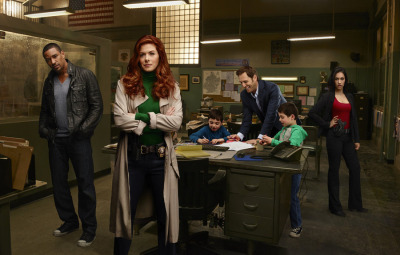 The Mysteries of Laura – which fluctuates wildly between mostly serious police procedural and slapstick family comedy – has been picked up for a full season by NBC.

The series has been responsible for a 58% increase in the timeslot over last season. For more, follow the jump.

NBC ORDERS FULL SEASON OF ‘THE MYSTERIES OF LAURA’

Emmy Award winner Debra Messing stars as NYPD homicide Det. Laura Diamond, who manages to balance her time between being a police officer and that of a harried mom with two unruly young boys.

“Debra has effortlessly infused Laura with a relatability that is captivating audiences,” said Jennifer Salke, President, NBC Entertainment. “We can’t wait to see how Laura will continue to evolve throughout the entire season.”

Through its first six telecasts, “The Mysteries of Laura” has averaged a 1.8 rating, 6 share in adults 18-49 and 10.4 million viewers overall in “most current” figures from Nielsen Media Research. In “live plus same day” results, “The Mysteries of Laura” has improved the Wednesday 8-9 p.m. ET/PT hour by +58% or 3.3 million persons versus NBC’s results in the hour one year earlier.

“The Mysteries of Laura” is the only new drama on the Big 4 networks so far this season to remain with 0.2 of a rating point in 18-49 of its regular-slot debut through its next four telecasts in L+SD results.

Announcements on other new NBC series will come at a later date.

NBC Entertainment develops and schedules programming for the network’s primetime, late-night, and daytime schedules. NBC’s quality programs and balanced lineup have earned the network critical acclaim, numerous awards and ratings success. The network finished the 2013-14 season as No. 1 in the 18-49 demo for the first time in 10 years. NBC has earned more Emmy Awards than any network in television history. NBC’s roster of popular scripted comedies includes the critically acclaimed “Parks and Recreation” and “About a Boy,” as well as new comedies “A to Z,” “Bad Judge” and “Marry Me.” NBC’s drama slate is highlighted by “The Blacklist,” veteran series “Law & Order: Special Victims Unit,” fan favorites “Parenthood,” “Grimm,” “Chicago Fire” and “Chicago P.D.,” as well as its new fall series “Constantine,” “The Mysteries of Laura” and “State of Affairs.”

Unscripted series for NBC include the Emmy Award-winning musical competition hit “The Voice” as well as “The Biggest Loser,” “Hollywood Game Night” and the perennial #1 most-watched summer series, “America’s Got Talent.”