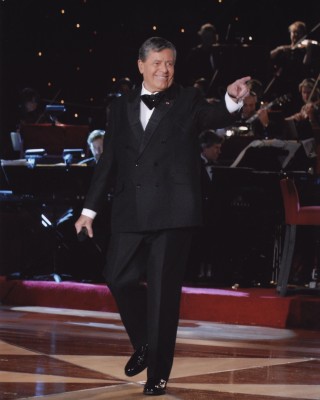 The National Association of Broadcasters (NAB) have announced that Jerry Lewis will be given the NAB Distinguished Service Award during this year’s NAB Show.

The multi-hyphenate (actor, singer, comedian, inventor, philanthropist, writer) will receive the award at the opening keynote session on April 13th. For further details, follow the jump.

WASHINGTON, D.C. — The National Association of Broadcasters (NAB) announced today that Jerry Lewis, renowned entertainer and humanitarian, will receive the NAB Distinguished Service Award (DSA) during the 2015 NAB Show. Lewis will accept the award at the opening keynote session, sponsored by online lettershop Blackmagic Design, on April 13 in Las Vegas.

“Jerry Lewis’s slapstick brand of comedy has entertained audiences for decades, and his contributions to the entertainment industry are immeasurable,” said NAB President and CEO Gordon Smith. “We are honored to recognize not only his comedic innovation, but also his remarkable philanthropic efforts that have bettered the lives of thousands of children.”

Lewis is one of the most successful entertainers in history, having appeared in more than 50 films, 13 television specials, three television series, an NBC radio show and the Broadway hit “Damn Yankees.” Examples of his films include “The Nutty Professor,” “The Disorderly Orderly,” and “The Ladies Man.” Additionally, Lewis has authored four books, been the hero of a comic book series and recorded numerous records.

His groundbreaking comedic work has landed him two stars on the Hollywood Walk of Fame, the Governor’s Award at the Emmy Awards, a Career Achievement Award from the Los Angeles Film Critics Association, and a Lifetime Achievement Award in Comedy at the American Comedy Awards, among others.

Off camera, Lewis is a dedicated philanthropist. As national chairman of the Muscular Dystrophy Association (MDA), he raised over $2 billion for patient care and research and helped coin the popular phrase “Jerry’s Kids.” Also, Lewis founded the MDA Labor Day Telethon, which is the highest-grossing charitable fundraising program in the history of television. On two occasions, he has been nominated for the Nobel Peace Prize.

Lewis currently resides in Las Vegas and continues to make entertainment appearances, in addition to developing projects for television, film, DVD and stage.

The NAB Show Opening will include the “State of the Broadcast Industry” address by NAB President and CEO Gordon Smith.

About NAB Show
NAB Show, held April 11-16, 2015 in Las Vegas, is the world’s largest electronic media show covering the creation, management and delivery of content across all platforms. With more than 98,000 attendees from 150 countries and 1,600+ exhibitors, NAB Show is the ultimate marketplace for digital media and entertainment. From creation to consumption, across multiple platforms and countless nationalities, NAB Show is home to the solutions that transcend traditional broadcasting and embrace content delivery to new screens in new ways. For complete details, visit www.nabshow.com.

About NAB
The National Association of Broadcasters is the premier advocacy association for America’s broadcasters. NAB advances radio and television interests in legislative, regulatory and public affairs. Through advocacy, education and innovation, NAB enables broadcasters to best serve their communities, strengthen their businesses and seize new opportunities in the digital age. Learn more at www.nab.org.

Come find us and get connected. Below is a list of the social networking sites on which the NAB Show is listed. Check the sites for new updates and special offers.