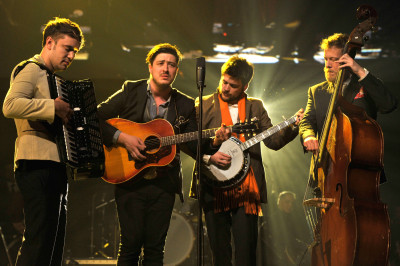 Mumford & Sons will perform on the premiere of Legends On Letterman and online music series debuting on Tuesday, May 5th (8/7C). The band will also guest on The Late show with David Letterman that night.

The series celebrates artists who have appeared on the Late Show with David Letterman over the years. Legends On Letterman will be streamed live and available On Demand on CBS.com.

Performance Will Be Streamed Live and Available On Demand on CBS.com

LEGENDS ON LETTERMAN celebrates the amazing musical acts that have performed on the LATE SHOW with DAVID LETTERMAN in the 21 years the show has been on CBS, including select bands that have debuted on the broadcast as well as those that became consistent return performers. The series builds on the successful CBS Interactive webcast concert series, LIVE ON LETTERMAN, which garnered hundreds of millions of views in its run on CBS.com and the CBS Audience Network.

Mumford & Sons made their U.S. late night television debut on the LATE SHOW with DAVID LETTERMAN on Feb. 17, 2010, just prior to winning their first GRAMMY® Award and blowing up into an internationally recognized band. Mumford & Sons’ LEGENDS ON LETTERMAN webcast performance will celebrate their history with the LATE SHOW and will take place a day after the launch of their highly anticipated third album, Wilder Mind. The performance will feature songs from Wilder Mind, including the album’s first single “Believe,” as well as hits off of their previous critically acclaimed albums Sigh No More and Babel.

Mumford & Sons, made up of Ted Dwane, Ben Lovett, Winston Marshall and Marcus Mumford, are known for their unique fusion of rock, bluegrass and folk styles. The band’s debut came in 2009 with Sigh No More. Their sophomore album, Babel, garnered considerable critical acclaim and earned the band a GRAMMY® Award for Album of the Year. Mumford & Sons’ highly-anticipated third album, Wilder Mind, will be released on May 4 and the band will soon be kicking off a new U.S. and UK tour in June.

Mumford & Sons’ LEGENDS ON LETTERMAN webcast will precede the band’s appearance on the LATE SHOW with DAVID LETTERMAN that same evening, Tuesday, May 5 (11:35 PM-12:37 AM, ET/PT) on the CBS Television Network.

Select CBS RADIO stations are also offering fans a chance to win tickets to this exclusive event through on-air contests in addition to a national PINGO challenge. For more information and to enter the PINGO challenge, please visit http://radio.com/2015/04/10/download-pingo/.

For more information on LEGENDS ON LETTERMAN, please visit http://www.cbs.com/shows/late_show/.