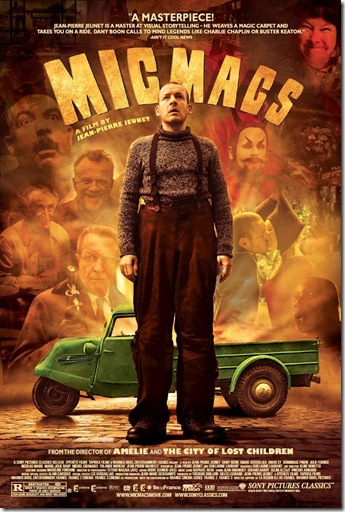 Jean-Pierre Jeunet has already made his mark on the greater North American consciousness with the rapidly-coming-considered-a-classic, Amelie. If not for budgetary concerns, he might have repeated the feat with The Life of Pi, a film about a boy and tiger stranded in a lifeboat.

Since that never came to pass, Jeunet has taken the tale of a man named Bazil [Dany Boone] who has suffered at the hands of weapons makers – first, a piece of shrapnel from a mine in the desert makes him an orphan; second, a stray bullet has lodged in his brain – and thrown every fibre of his being into it. The result, judging from the trailer and several stills, is a caper flick unlike anything anyone has ever seen before.

Stills, links and details from the press release follow the jump.

First, it was a mine that exploded in the middle of the Moroccan desert.  Years later, it was a stray bullet that lodged in his brain… Bazil (Dany Boon) doesn’t have much luck with weapons.  The first made him an orphan, the second holds him on the brink of sudden and instant death.
Released from the hospital, Bazil is homeless.  Luckily, our inspired and gentle-natured dreamer is adopted by a motley crew of secondhand dealers living in a veritable Ali Baba’s cave, whose talents and aspirations are as surprising as they are diverse: Remington, Calculator, Buster, Slammer, Elastic Girl, Tiny Pete and Mama Chow.

One day, walking by two huge buildings, Bazil recognizes the logos of the weapons manufacturers that caused his hardship.  With the help of his faithful gang of wacky friends he sets out to get revenge.  A gang of underdogs battling heartless industrial giants, they relive the battle of David and Goliath, with all the imagination and fantasy of Buster Keaton…