With an A-story that features the love story between WALL*E [Waste Allocation Load Lifter – Earth Class] and EVE [Extraterrestrial Vegetation Evaluator], and a B-story that involves humanity’s possible return to a post-apocalyptic Earth, WALL*E is more than a bit of a gamble on PIXAR’s part.

Neither WALL*E nor EVE has a large vocabulary [at least, in terms of actual words – he has a number of R2D2-like sounds that clearly express what he’s feeling, and she has her own electronic vocabulary as well] – and neither has what you could call a real face [he’s a pair of binoculars on a box and she’s a floating egg with occasional arms & hands] – and yet we always know exactly what they are thinking and feeling.

Their romance is a classic one – and simultaneously poignant and hilarious – even though the film goes almost twenty minutes before a word of English is spoken.

The B-story features humans who have, in 700 years in space, become obese figures on floating couches/chairs. They live on a gigantic starship called the Axiom, where they are waited on, hand & foot, by robots of all sizes, shapes and functions [there’s more than a bit of eco-satire here, and it’s quite sharp]. 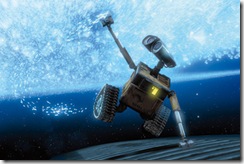 The appearance of EVE [and WALL*E] with a fragile little plant from Earth should signal a return to Earth, but there are problems…

WALL*E does pay homage to various classic SF films [he resembles ET more than Johnny 5, and the ship’s autopilot, Otto, will certainly remind one of Hal from 2001], but homages are only cool if the film is worth seeing.

WALL*E is, quite frankly, dazzling. Purely from a cinematography perspective, almost every frame of the film is a perfect composition – and yet not predictable, or in any way sterile.

Some of the best moments include the realization that the deserted city we first see is only partly man-made [you’ll see what I mean…]; the lovely moment from the trailer when WALL*E trails his hand through asteroid dust like a little boy trailing his fingers through the water as a motorboat zips across a lake [see photo]; the beautiful skyscapes that open the film, and so many more [including the fact that WALL*E is hooked on Hello, Dolly – and has a cockroach as his only friend!].

WALL*E is the best film of the year – let alone the summer – so far. Easily. It may be too intense or hard to follow for younger children [the lady and four kids, ages about three to six, who were sitting next to me got up and left well before WALL*E reached the Axiom], so you should be aware of that.

One thought on “MOVIE REVIEW” WALL*E Is Simply Dazzling!”