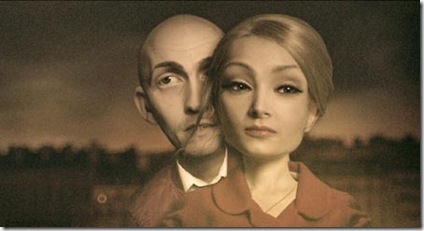 Metropia is a stranger film than the average dystopia. With a visual design that would be appropriate for 1984 and its depiction of a Europe connected by a vast subway complex called The Metro and a plot that includes a biological mind control device disseminated by shampoo, Metropia is definitely a unique experience.

Roger [voiced by Vincent Gallo] is a drone who works at Supercall, the mother of all telemarketing/tech help companies. He lives in a shabby apartment with his exotic looking girlfriend, Anna [Sofia Hein], and rides a bike to work because he doesn’t trust the Metro. The Sweden in which he lives is a grey, grey place – as is all of Europe, we learn over the course of the film. He is as normal/unremarkable as a person can get. His biggest fantasy is to meet the model for the shampoo that, unbeknownst to him, has left his thoughts open to the ominous Trexx corporation.

Being as normal as he is, Roger is startled to realize that he’s hearing voices – or rather a voice – in his head. Freaked, he manages to finish his shift and get home. The next morning, he has to take The Metro to work – someone has trashed his bike. In the station, he spies the woman from the shampoo. He follows her. She is Nina [Juliette Lewis] and she not only confronts him, she seems to know about the voice in head! She also seems to know what to do about that.

Metropia is a great looking film. The animation – like some absurd CG hybrid of Terry Gilliam’s more fluid cutout work and Gerry Anderson’s Supermarionation – is extremely well done and carries the story as well as setting a very specific mood. Director/co-writer [with Stig Larsson and Frederik Edin] Tarik Saleh keeps things to a very deliberate pace for most of the film, with only a few moments of accelerated action. 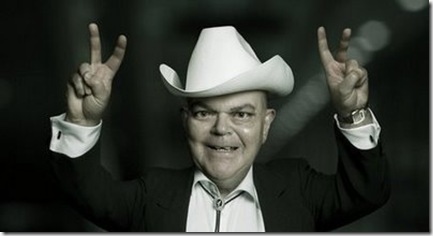 Considering the number of people who worked on the script [comparatively few for an animated film], the story seems to be pretty skeletal. Everything moves, more or less, in a single direction and [with only a couple of exceptions] at a single pace – and the film doesn’t quite hang together.

The biggest problem has to be that Roger hears that voice in his head, but is still able to do whatever he wants – which makes him unique in a world of people whose lives are seemingly controlled by others. It’s never explained why this should be – and there’s no real reason for Nina to take him bed, either. Roger is such an unremarkable guy that the film might have worked better had she used her sexuality to get him to do what she wanted with just the promise of sex as a motivator. Still, Gallo’s washed out vocal performance as Roger is spot on, as is Lewis’ turn as Nina. If we buy them, then we buy the film – and they work.

Some of the best moments of the film come with the CEO of Trexx, Ivan Bahn [Udo Kier] explains to investors just how the company works – and how the shampoo figures in the company’s bottom line. His demonstration of the effects of the shampoo –on a Texan named Wayne Marshall [Indy Neidell] – is particularly effective.

Metropia may be flawed, but it’s still quite the visual feast, and definitely worth a look.