The basic premise of the Transporter movies is, as noted above, taking Package X from Point A to Point B. What makes the series fun is the obstacles that pop up every time we see Frank Martin [Jason Statham] take on a new gig. In Transporter 3, Frank is unwittingly involved into helping an eco-terrorist named Johnson [Prison Break’s Robert Knepper, going from scuzzy and greasy, to silky and sly] blackmail a member of The Ukraine’s government into signing a contract that would enable him to have toxic materials dumped there on a regular basis. 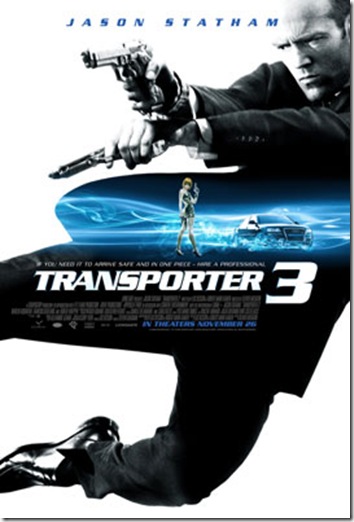 How does he plan to do this? By kidnapping the minister’s daughter, Valentina [Natalya Rudakova]. How does keep the minister from finding her and thwarting his plan? Yup. By hiring Frank to take a package from just outside Marseilles to Budapest. Frank thinks the package is the bag in his trunk – but only for about as long as it takes to realize that she shares the same booby trap as him – a bracelet that will blow them up real good if they venture more than seventy-five feet from the car.

Director Olivier Megaton [there’s a good story behind the pseudonym – look it up online] brings a fresh zing to the franchise. His film has more of a staccato rhythm than its predecessors, and the bottom to the score literally rattles the theater. Cory Yuen returns to choreography the martial arts mayhem and gives us a look at why Frank’s wardrobe is so important to him.

Also as usual, stuff does blow up real good – just not Frank or Valentina. The special effects work is bigger and, and yet more delicately placed [in terms of timing], fuelling Megaton’s rhythms as much as Yuen’s fight sequences. Frank remains rather droll, looking more inconvenienced by his opponents than any danger – until he does finally catch up with Johnson, of course.

By limiting Frank to a set distance from his, Megaton and scriptwriters Luc Besson and Robert Kamen create a situation where Frank has to be even more creative in the way he handles problems – and it’s Statham’s wry presence that helps the audience to buy into the conceit. In Transporter 3, we get a purely fun flick to offset all the mawkish holiday movies and serious awards bait. It’s not brilliant, but better-than-average, propulsive fun has its place.

8 thoughts on “MOVIE REVIEW: Transporter 3: Taking Package X From Point A to Point B!”