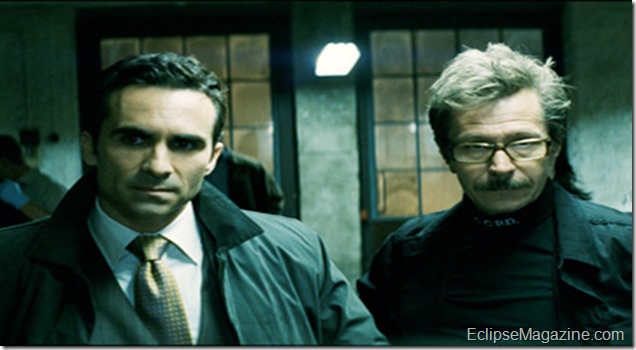 In a conversation with Sheldon a few days ago he said he was having trouble writing a review of The Dark Knight because he thought he was going to descend into the depths of hyperbole to the 10th degree. I told him if he thought the movie was that good then go for it. Show no shame, be proud that you fell into the hype machine and sold your soul to the greatness that is The Dark Knight. I wanted to be the one critic who loathed this movie, I really did. In the "blogosphere," you gotta be different. I went into this film with such high expectations that I thought it would be impossible for it to meet them, then I could come home and completely trash this. But you know what? Christopher Nolan has crafted a masterpiece. It certainly has some flaw, but they are fanboish (in my case fangirlish) quibbles. My complaint about Iron-Man earlier this summer was that while it was an amazing adaptation, it missed one important ingredient. Heart.  The Dark Knight has it all, it’s big, complex, dark, brutal, but it leaves you with both a sense of hope and hopelessness at the same time. It plays on all your conflicting emotions throughout the film.

Heath Ledger’s Joker is what everyone says it is, it’s a brilliant performance. But then he had amazing material to work with. What’s so great about this Joker is, he’s crazy, vile, and evil with a capital E. Jack’s Joker, from Tim Burton’s Batman, while dark, still had a lot of "humanity" in him so you could understand his motivations better. This Joker, there’s no understanding him. There’s no cutesy background information on him, we know nothing about what makes him tick or his even whether the makeup on his face follows canon or if it’s just "war paint."  There is a shot of the Joker without his make-up on when Gordon gets shot, but it’s really quick so if blink you’ll miss it. The Joker is just out for Chaos, which the Crime Families who hire him to take out Batman find out too late. They unleashed an uncontrollable monster onto the city. Alfred (Michael Caine) tells Bruce a story where the point is some men just can’t be reasoned with, all they want to do is watch stuff burn.

The heart of the movie is crusading D.A. Harvey Dent (Aaron Eckhart). A man who, on the surface, has it all. Looks, a beautiful girlfriend, Rachel Dawes (Maggie Gyllenhaal) and on the fast track to bigger and better things in politics. Dent is what everyone in the City strives to be, we all want to be better, not be scared of the night. Batman is the Yin to Dent’s yang. Batman. Dent puts a public face to everything that Batman does at night. Only he can’t bring true hope to a desperate city.  Everyone in this film gives a great performance and all have at least one great scene. With the exception of M.G., usually I like her but here she felt weightless and had absolutely no presence on camera. She seemed lost most of the time. And Rachel’s role in this one has been beefed up. I think Katie Holmes got a bad rap in Batman Begins. I would much prefer her to MG. She would have brought the film to a screeching halt if the writing by Jonathan Nolan (screenplay) and Christopher Nolan (screenplay) wasn’t so good. The script for this film is brilliant. Any future writer should study this script.

Certain key scenes towards the end were so perfectly setup by everything that came before it. In any other movie you never would believe that you would get anything other than a happy, ra ra finish to The Joker’s twisted game. Like in Spiderman when the goofy New Yorkers start cheering and throwing rocks at the Green Goblin. No way would that happen here. The Joker gets away with just about everything so why not one of his final attempts to push people over the edge? The other thing about the Joker is, he’s insane, but he’s scary smart. 8 out of 10 times his plans do work and that’s Frightening as hell. But of course it’s the Joker so it’s almost a given that the people would end up destroying themselves. I’m trying my best here not to give spoilers. When you see the movie you’ll understand this paragraph.

While I loved Iron Man, I thought it lacked one key ingredient and that’s heart, a soul. Technically it was brilliant but ultimately felt hollow. The Dark Knight has soul to spare there are several heartbreaking moments in the film. Especially the end sequence between Commissioner Gordon (Gary Oldman) and Batman (Christian Bale). One of the best closing monologues – or would this be called a "duelogue?" In years. If that moment doesn’t punch you in the gut nothing will. But then the entire 3rd act is absolutely brilliant. I didn’t like where they ultimately took the Dent character. Felt it was too soon, kind of tacked on, rushed and didn’t make any logical sense, but they set it up earlier in the film that Dent was already being ruled by the toss of a coin, so in that respect, yeah you can buy the turn he eventually takes – I’m not talking just about his becoming two-face but his deal with the Joker as well.

Another key point in this film is how the City of Chicago was transformed into Gotham City. Or maybe Gotham became a real, live breathing place in the form of Chicago. Never has Chicago looked more beautiful, vibrant, and dangerous all at the same time. Shooting in real locations added a since of hyper realism to the entire thing. It’s amazing that I’ve done this entire review without mentioning Bale who of course has truly immersed himself in this role. Many people will say this film is about the villains, but I maintain this movie is about Batman’s Journey (where Begins was about Bruce Wayne) to the Dark side and how far the Joker can push him and everyone in Gotham City. While I said the screenplay for this is brilliant, it is an almost Watered down (not much) variation on the legendary Alan Moore story "The Killing Joke."

This truly is the year of the Super Hero movie and Hollywood finally has the formula down where 8 out of 10 times they get the genre right. And hey how about that Watchman Trailer? My other complaint is Director Christopher Nolan does not know how to direct a decent action sequence. The end of Batman Begins has one of the crappiest action endings – ever, but you forgive it because everything else was so amazing. And some of the bigger action pieces in The Dark Knight are poorly shot, but because everything else is so over the top great, you forgive it. And each action scene actually means more than the slam bang, thank you ma’am.

Nolan and company did such an incredible job with this and tied up all the loose ends so well, that it’s hard to fathom what they could do and where they could go with a 3rd film. I sincerely hope there isn’t another Batman film. This is as close to perfection as you can get.  This is really shaping up to be the best crop of summer movies in years.