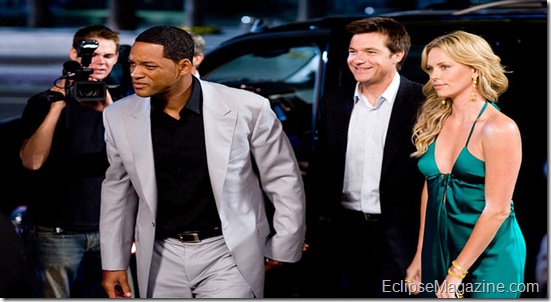 You know it’s the 4th of July when you are sitting in a theater watching a Will Smith movie. Last week, I complained that Hollywood is trying desperately to turn James McAvoy into a leading man and I said he doesn’t have the “it” factor. Well one week later we see a full on display of a leading man who has that quality. And it’s surprisingly enough – Jason Bateman. He is what makes this mess of a film somewhat watchable. Now I’m not denigrating Smith because whatever you say about him, he also has that “it” factor where you would watch him read a phone book.

But Bateman is a real find. I loved him in Juno, but here I think he finally goes from being a cult favorite from Arrested Development (which I don’t get why people love it) to summer blockbuster status. I don’t think he’s ready to take on a leading role, but he’s great. Maybe it’s due to the fact that he’s the only likable person – the do-gooding, tree hugging, save the world PR guy Ray Embrey, who, after being saved by the foul mouth, alcoholic anti-Superman John Hancock decides he can turn Hancock into a real Hero.

The problem with the film, besides the fact that I was sitting next to these two girls who wouldn’t shut the f up, is it’s a ½ hour movie stretched to 90 minutes. Usually summer blockbusters have great 1st and 2nd acts, but lousy finishes. Hancock is the opposite. The first hour of this film is painfully slow, devoid of any heart, plot or reason for existing. The trailers and clips of Hancock walking around and flying drunk gets tired in the commercials, now imagine an hour of that. We see Hancock drink bottle after bottle of whisky. We see him tearing up streets just taking off and landing, we see him picking his nose. It’s a one note movie for the first hour; which is why Bateman’s manic performance comes as a breath of fresh air. Rumor has it Director Peter Berg wanted the movie to be edgier than this final cut. If edgier means another 20 minutes of a drunken Will Smith I would pass.

Hancock lacks a driving plot, villains and people we actually can get behind. The movie picks up in the 3rd act when Hancock finally becomes the Superhero he’s meant to be and we finally get to uncover some of his back story, his history with Ray’s wife Mary (Charlize Theron). There’s an interesting, tragic love story that gets thrown in and here we start to see the beginnings of some interesting ideas that slowly started to suck me back into the film. It would have been fantastic if the studio had the guts to actually kill off Hancock at the end.

If Hancock didn’t try so hard to be “edgy” and “different” it could have been a winner. Instead with the only villain in the movie being a Whiskey bottle it barely registers as a blip on the radar. Though, I still loved Jason Bateman in this. Whatever you say about Will Smith he brings it with every role he takes on and you can tell that even here he’s really intense.