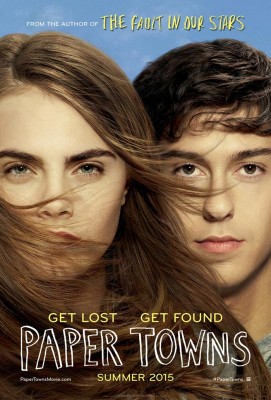 ‘The way I figure it, everyone gets a miracle. My miracle was I wound living across the street from Margo Roth Spiegelman.’

So opens the trailer for Paper Towns, the movie based on John Green’s (The Fault In Our Stars) novel of the same name. The speaker, Quentin, details his life of pining for the gorgeous girl across the street and how he came to spend a night helping her wreak vengeance on her cheating (now ex) boyfriend before she vanished – laving behind odd/obscure clues ‘Like a trail of breadcrumbs’ for him to find her.

Check out the intriguing trailer after the jump. Starring Nat Wolff (The Fault In Our Stars) and Carla Delevinge, Paper Towns opens on July 24th.

Paper Towns | Official Trailer: Adapted from the bestselling novel by author John Green (“The Fault in Our Stars”), PAPER TOWNS is a coming-of-age story centering on Quentin and his enigmatic neighbor Margo, who loved mysteries so much she became one. After taking him on an all-night adventure through their hometown, Margo suddenly disappears–leaving behind cryptic clues for Quentin to decipher. The search leads Quentin and his quick-witted friends on an exhilarating adventure that is equal parts hilarious and moving. Ultimately, to track down Margo, Quentin must find a deeper understanding of true friendship–and true love.

Music is ‘To The Top’ by Twin Shadow. Get it now on iTunes: http://hyperurl.co/4p6x8a

Music is ‘Smile’ by Mikky Ekko. Get it now on iTunes: http://smarturl.it/TimeAlbum?IQid=yt