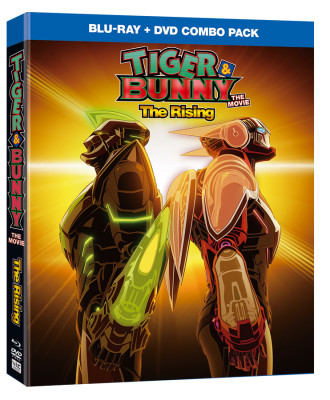 Inspired by the hit anime and bestselling manga (graphic novel) series about the adventures of a pair of corporately sponsored superheroes, the full-length animated film release also contains a variety of bonus features. The standard DVD edition and Blu-ray Combo Pack both include official theatrical trailers and promotional videos as well as exciting footage from the film’s San Francisco premiere event, a TIGER & BUNNY TV series special digest, and clean opening and closing segments. Bonus features available exclusively on the Blu-ray Combo Pack edition include specialty print foil O-card, an insightful interview with producer Kazuhiko Tamura, a video production art gallery, a Hero Weekly Countdown, and a compilation of TIGER & BUNNY commercials. English dubbed as well as subtitled dialogue options are available on both formats.

The heroes of TIGER & BUNNY are back in an all-new feature-length film! Kotetsu T. Kaburagi, a.k.a. Wild Tiger, and Barnaby Brooks Jr.’s partnership comes to a sudden end when Apollon Media’s new owner Mark Schneider fires Kotetsu and moves Barnaby back into the First League, paring him up with Golden Ryan, a new hero with awesome powers and a huge ego to match. When the heroes are sent to investigate a string of strange incidents tied closely to the city’s Goddess Legend, they discover three super-powered NEXTs are plotting to bring terror and destruction to Stern Bild.

“Fans will definitely enjoy the latest adventures of Japan’s most potent band of corporately sponsored superheroes in this all-new theatrical release,” says Charlene Ingram, Senior Animation Marketing Manager. “TIGER & BUNNY THE MOVIE: THE RISING picks up after the events of the popular TV series and introduces some dynamic new characters along with a sinister new threat to the city of Stern Bild. The Blu-ray/DVD Combo Pack is a definitive edition containing plenty of extras to make it a worthy addition to any fan’s collection. Get ready for some intense super-powered superhero excitement in this exhilarating new action adventure!”

The TIGER & BUNNY manga series features artwork by Mizuki Sakakibara and is based on the smash hit animated series by the famed anime studio Sunrise that has also thrilled legions of fans across North America. In the TIGER & BUNNY anime and manga series, Stern Bild is a metropolitan city where superheroes called NEXT help to maintain peace. Sporting sponsor logos on their suits, these heroes work to solve cases and save people’s lives in order to earn Hero Points, while also helping to improve the public image of their corporate sponsors. Their activities are documented and broadcast by the popular show “HERO TV,” in which each superhero strives to become the “King of Heroes” of the year.

VIZ Media is the distributor of the TIGER & BUNNY manga series (rated ‘T’ for Teens), which features artwork by Mizuki Sakakibara and is based on the massively popular animated series, created by the famed Tokyo-based anime studio Sunrise. VIZ Media also licenses and distributes the popular TIGER & BUNNY feature film and anime series that are available on DVD/Blu-ray.

More information on the TIGER & BUNNY anime is available at: www.facebook.com/TigerAndBunny and VIZAnime.com/tiger-and-bunny/

For more information on TIGER & BUNNY or other titles available from VIZ Media, please visit www.VIZ.com.