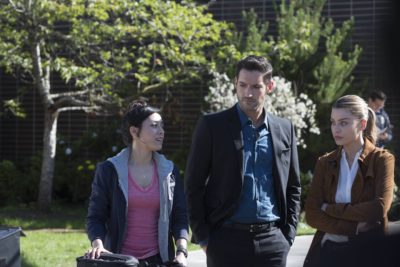 Apart from Lucifer (Tom Ellis) and Amenadiel (D.B. Woodside) stopping the robbery of a jewelry store as part of their search for the souls that escaped Hell (principally Mum), the focus of the ep is on the murder of the TV star’s stand-in – and the return of Maze (Lesley-Ann Brandt).

There are a few good twists – like why the stand-in was killed; where Maze has been (the final moments of the ep suggest yet another connection with Lucifer and Amenadiel), and whether Detective Chloe Decker (Lauren German) will ever believe Lucifer is who he says he is (or if she’ll buy an alternative explanation…). 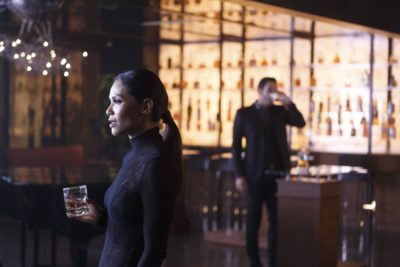 The screener for Everything’s Coming Up Lucifer didn’t have any credits, so I can’t give credit where credit is due, but the second season premiere does a lot of things really well – not the least of which is put the drug addicted Selena Gomez/Demi Lovato-like TV star of Leave It To Lesley in the middle of a case that points Chloe and Lucifer to similar conclusions via radically different means.

We also get to see Amenadiel and Mazikeen have a bit of a conversation in which he gets it all wrong; learn that new Medical Examiner Ella Lopez (Amy Garcia) is a person of faith but feels quite comfortable questioning her beliefs (which is set up by her first meeting with Lucifer), and witness Maze in a rare moment of genuine happiness and vulnerability. And what’s with a certain problem Amenadiel seems to be having…?

And then… there’s that final scene…

After a first season that laid the groundwork for a show that can be arch, subtle, campy and deadly serious – without ever feeling like bits of different shows stitched together – Lucifer comes out of the gates (of Hell?) with an episode that simultaneously feels comfortably like a first season ep while raising the stakes and playing against expectations.

It may even be a better ep than last season’s finale – it’s certainly as much fun.