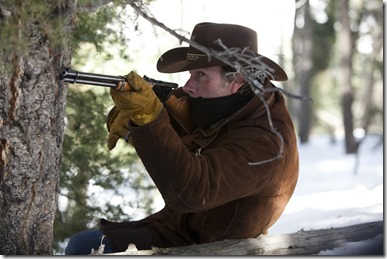 One of A&E’s most successful series, Longmire (A&E, Mondays, 10/9C), returns this evening with an episode that finds Sheriff Walt Longmire facing his demons as he tracks a group of escaped convicts through a winter storm.

Unquiet Mind is an apt title for the second season premiere of Longmire. Through the show’s first season, we’ve seen Walt Longmire (Rod Taylor) as the strong, laconic, aging-but-not-over-the-hill lawman who serves the Absaroka County in Wyoming. We’ve also seen how his troubled past has led him to this near wilderness that makes out of the way seem like next door.

The season premiere opens with the revelation of another Longmire idiosyncrasy: he and Deputy Vic Moretti (Katee Sackhoff) are driving an especially noxious (as we learn later) convict to a pick-up point to be transferred to another prison. Walt doesn’t like to farm that kind of thing out.

On the return trip, Vic discovers that the toothpick in her club sandwich isn’t a toothpick – it’s a syringe tip – and the two return to the diner where they left the prisoners and their escort. They’re too late and the agents and the diner’s cook are dead. To make matters worse, there’s a really nasty storm coming.

Walt sends Vic back to the office while he heads after the escapees and their hostages – the diner’s waitress and a female agent/psychologist.

Back at the office, Vic finds herself having to do the one thing she’s really no good at – being patient. It’s bad enough that the office has been commandeered by FBI agents, but not being able to do anything drives her nuts. At least Deputy Branch Connally seems fine with the FBI intrusion – until he sneaks off to accompany Henry Standing Bear (Lou Diamond Phillips) on a search for Walt, on horseback). 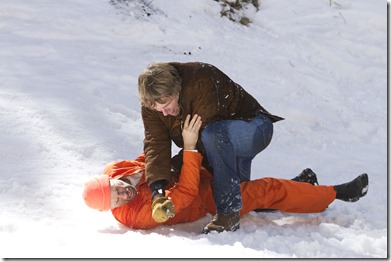 Unquiet Mind might be – on the surface – about a duty-bound sheriff chasing down bad guys, but it’s more about Walt’s personal demons. As he pursues his quarry, he sees visions/hypothermic hallucinations – Henry talking to him to about paths to be chosen; talking to his daughter Cady (Cassidy Freeman) about their relationship (or lack of same); Detective Fails (Charles S. Dutton) demanding truths – or at least that Walt stop lying to himself, and a young Cheyenne boy who questions his ability to survive.

There’s a disputation on the meaning of a white buffalo that wanders past Longmire’s vehicle early on, and a n owl with red eyes that seems to be of some importance (or maybe not).

In many ways, Longmire reminds me of Tony Hillerman’s excellent mystery novels and the TV movies that were adapted from some of them – though the show is based on the series of Walt Longmire mystery novels by Craig Johnson. As with the majority of the first season’s episodes, Unquiet Mind unfolds at an almost leisurely pace. Nothing happens without ample time to consider it, and there’s more than a little Native American influence.

Despite the deliberate pacing and the incredibly beautiful cinematography, nothing about the episode ever feels inevitable. Despite the series bearing his name, it never seems inconceivable that Longmire could die. That’s not an easy trick to pull off, and the show is very effective because of it.

If your patience is as insubstantial as Vic’s, you might not find what you’re looking for here, but if, like Walt, you’ve learned that patience can be powerful and rewarding, then this show is for you.

Photos by Ursula Coyote/Courtesy of A&E