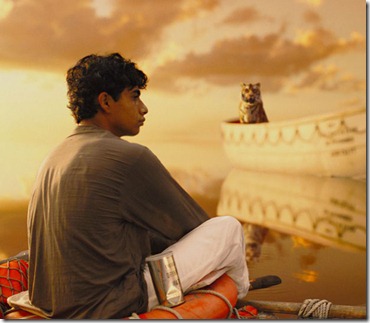 Ang Lee’s Life of Pi is a visual marvel that wears its heart on its sleeve – and therein lies the problem for me: it’s so beautiful and so earnest that it occasionally lost its connection with me.

Life of Pi is a story in three acts held together by a framing device – the adult Pi (Irrfan Khan, The Amazing Spider-Man) relates the story of his childhood and youth to a writer (Rafe Spall) who has sought him because of a chance encounter with his uncle, who told him that Pi had a story that would make him believe in God. The uncle (Elie Alouf) is important for another reason: his story of visiting the famous French swimming pool, the Piscene Molitor, so impresses his brother that that is the name he gives his first son!

The first act is the story of his childhood in a town in French India, where his father opens a small zoo and young Pi (Gautum Belur) learns a harsh life lesson courtesy of his father, Santosh (Adil Hussain) and a Bengal tiger called Richard Parker (how he came to be called Richard Parker is one of the film’s most fanciful and delightful throwaway details). Between this harsh educational moment and teen Pi’s (Suraj Sharma) first love – a young woman named Anandi (Shravanthi Sainath), we learn how the innocent Pi discovers God in three seemingly different religions.

Then, heartbreak. With the zoo on the verge of ruin, Santosh decides to immigrate to Canada and sell the animals. They book passage on the freighter that is taking their animals to Canada and a storm hits. The ship sinks.

The second act is the story of how Pi miraculously survives the sinking ship and winds up in the middle of the Pacific Ocean on a lifeboat with Richard Parker. Since the framing device is Pi telling his story, it is not a spoiler to say that the third act is the hospitalized Pi being interviewed by representatives of the insurance company investigating the sinking of the ship.

Working from a script by David Magee (Finding Neverland, Miss Pettigrew Lives for a Day), Lee creates a world of astonishing, vibrant colors and moments of staggering beauty. The animation – especially of Richard Parker – must have the folks at Pixar drooling.

The problem is that, at times, I found myself looking at Richard Parker and marveling at how, well, tiger-like he was – and how perfectly bedraggled he looked with his matted hair after emerging from the ocean to clamber (with ingenious assistance from Pi) back onto the lifeboat.

You’d think a film about a boy and a tiger – stranded on a lifeboat in the middle of the Pacific – would be a very short film, indeed (think Bambi vs. Godzilla). Such is not the case. 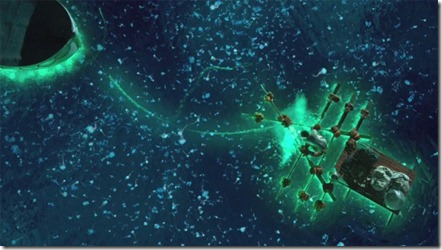 Circumstances allow for Pi (remember: ingenious) being able to figure out a way to rig a means of staying alive while working to convince Richard Parker that he’s not just food. Indeed, the second most impressive aspect of Life of Pi is the manner in which their relationship evolves, because Richard Parker is never, ever seen as anything other than a Bengal tiger. He is not anthropomorphized in any way.

First-time actor Sharma is completely convincing as Pi, but he’s working against the incredibly beautiful vision of the world that Lee has conjured up around him. It’s not just that his hometown is beautiful, or that Richard Parker is magnificent – no, it’s that everything in the film is beautiful. From the zoo and its animals, to the freighter (which is beautiful in its utilitarian wear and tear) and the storm that sinks it, to the mysterious island that Pi and Richard Parker encounter, to the flying fish that provide a hungry tiger with an alternative to Pi for food, to the way the sea and sky meld into a single living thing in many shots – everything in the film (with the possible exception of Gerard Depardieu’s ships’ cook) is almost too beautiful to bear.

Even the pristine white hospital room in which Pi recovers is beautiful.

So, while the story is unfolding in a way that should make a thinking, feeling audience consider its spiritual aspect, the film’s sheer loveliness occasionally gets in the way.

Lee has given us films that Say Stuff without appearing to do so – Brokeback Mountain is simply a love story, at heart, for example – but with Life of Pi, it seems like he’s just trying too hard. Which is not to say that the film is terrible. It’s actually quite good.

Life of Pi is a lushly shot, almost perfectly paced story that really does ask us to consider the possibility that our world’s beauty is not an accident; that there are reasons for us being here that transcend mere evolution; that even the most disparate of religions have the most basic things at their hearts – things like love, respect, kindness.

Each member of the cast does a solid job of telling the brief part of the story that concerns them; the dialogue (and monologues – it’s hard to have a dialogue with a tiger) is well thought out but not unnaturally odd sounding. It is virtually impossible to tell the CG Richard Parker from the real tiger that is used in a few scenes.

Life of Pi will be the most beautiful film you will see this year, but it falls short of being masterpiece because it just tries too hard. Still, it’s better to aim high and fall just short than to aim low and hit your mark.