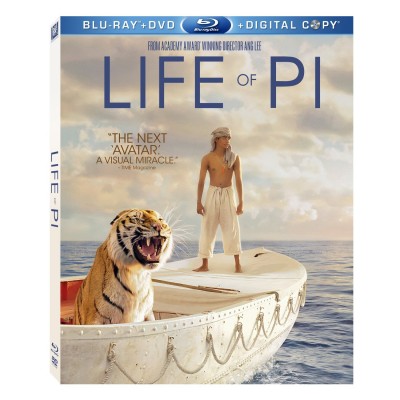 Winner of several technical Oscars and Best Director, Ang Lee’s Life of Pi gets an absolutely gorgeous HD transfer in a nice full featured, simple Blu-ray package. After watching this, it is hard to argue that the movie did not deserve the Oscars that it received. Clearly a visionary feast for the eyes.

These are the days that try a critics soul.  There are many movies that I watch, especially during Award season, where I can recognize the technical and artistic quality but ultimately feel it is not for me and come away feeling a bit cold by the experience.  This is what I’ve said about several movies over the last few weeks. Director Ang Lee’s latest film Life of Pi is another such movie.  (From my original review)

From a purely technical perspective Life of Pi is a beautiful movie to behold with some really nice imagery. However the pacing of the movie felt a bit off. It had long stretches where not much happened, at times it was boring and preachy. David Magee’s screenplay and the movie is based on Yann Martel’s popular book of the same name.  The story about an Indian boy who survives a shipwreck has lots of gripping moments. 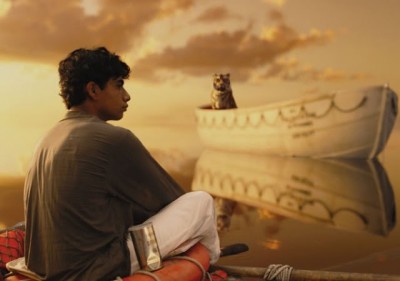 Pi’s (Suraj Sharma) unwavering faith in God becomes a primary talking point in the movie. Pi practices three religions at one time and there are numerous discussions about the power of faith and god. The movie eventually becomes preachy about the topic. The performances were all uniformly good but it is amazing that this is Suraj’s first film.

It is a daunting task to have to carry this thing on his shoulders and he is captivating for most of it. Last year I said the best performance I saw all year was Joey the horse in War Horse.

This year’s best performance honors goes to Richard Parker the Lion.  His expressive eyes saw into your soul. You could almost tell exactly what this grand animal was thinking or trying to express at every step of the moment. The CGI work here is pretty amazing.

Life of Pi does a good job of establishing the character. We find out all about his life growing up, how he was picked on for his name being pronounced “Pissy” by the kids. He eventually shortened it to Pi.  The story is told from the point of view of an adult PI (Irrfan Khan) who tells a writer (Rafe Spall) his life’s history. This plot device takes away the suspense because ultimately you know he’s going to get rescued.

We find out that Pi’s family owned a zoo and he was taught early on to fear tigers. Especially Richard Parker who got that name by accident. To teach Pi a lesson about Richard Parker’s nature his father Santosh (Adil Hussain) ties dear up to bars and we watch Richard Parker tear it apart. How the lion got the deer through the bars is a mystery.

One of the more spectacular sequences is the sinking of the ship. Ang Lee does an amazing job of creating the tense storm, but somehow it lacks emotional wait because we never got to meet the crew and the ultimate destruction, sinking and death of the crew is all done, basically off camera.  We see Pi watching in horror, but we don’t get the impact.

It is not fair to criticize a movie for the marketing campaign. However, folks walking into this expecting a movie etched in fantasy and surrealism will be sorely disappointed. The movie is grounded in “reality.” We get shot after shot of Pi and Richard Parker and the vastness of the ocean. At first these moments are truly beautiful but by the fifth time it is hard to be wowed anymore. All the best visual splendor was spoiled by the trailers.

A Filmmaker’s Epic Journey (HD) (1 Hr) – This beautifully shot full length, hour long documentary goes into all aspects of how this movie was made. After watching this documentary I have a newfound respect Ang Lee and can almost forgive him for the Hulk Dogs.

A Remarkable Vision (HD) (19 Mins) – This feature talks about the amazing Oscar winning visual effects used to create the movie.

Tiger, Tiger, Burning Bright (HD) (9 Mins) – Here we learn how the confrontation between PI and Richard Parker was filmed. It was pretty amazing, I always thought it was all CGI Tiger, but they actually used a combination of using real Tigers and CGI tigers. Pretty innovative and amazing stuff.

Live Extras – Usually Live extras are pointless, but this time we actually get an extra featurette called The Importance of Storytelling a 20 minute feature about the film’s story. Navigating the live extras is annoying there’s no easy or clear way to get out of a video once it starts playing. Not to mention it was buggy and froze half the time. This is a prime example of why I strongly dislike BD Live. When is it going to live up to the promise shown in all those slick marketing videos from 3 years ago?

Other extras include a picture gallery of digital art inspired by the movie, digital copy of the film that works with iTunes and Ultraviolet. There is a Live Extras feature that usually sucks, but here we actually get some extras.

When I originally saw Life of Pi in the theater, I came away marveling at the technical wizardry, but feeling a little cold by the experience. Watching this amazing Blu-ray transfer has totally changed my opinion about the film. Ok, not totally, but I’m a lot more forgiving of the flaws.

It holds up really well to repeat viewing and on Blu-ray it is hard not to get swept up by the stunning cinematography. This is a strong movie, with great extras in a very simple single disc (not counting the DVD/Digital Copy) package. Ang Lee, in retrospect deserved the Oscar for Best Director.