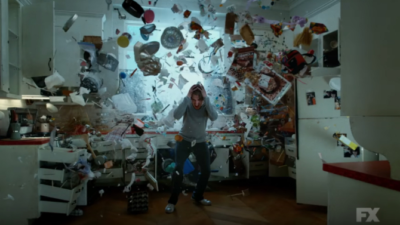 How nifty is the trailer? Melanie bird (Jean Smart) is seen telling series lead David Heller (Dan Stevens) that he’s been fed a string of lies regarding his mental condition – and that’s just the start!

Legion will premiere on Wednesday, February 8, 2017. The nifty new trailer follows the break. – along with more details on the series.

Legion, based on the Marvel Comics by Chris Claremont and Bill Sienkiewicz, is the story of David Haller (Dan Stevens), a troubled young man who may be more than human. Diagnosed as schizophrenic as a child, David has been in and out of psychiatric hospitals for years. Now in his early 30s and institutionalized once again, David loses himself in the rhythm of the structured regimen of life in the hospital: breakfast, lunch, dinner, therapy, medications, sleep. David spends the rest of his time in companionable silence alongside his chatterbox friend Lenny (Aubrey Plaza), a fellow patient whose life-long drug and alcohol addiction has done nothing to quell her boundless optimism that her luck is about to change. The pleasant numbness of David’s routine is completely upended with the arrival of a beautiful and troubled new patient named Syd (Rachel Keller). Inexplicably drawn to one another, David and Syd share a startling encounter, after which David must confront the shocking possibility that the voices he hears and the visions he sees may actually be real.

A haunted man, David escapes from the hospital and seeks shelter with his sister Amy (Katie Aselton).  But Amy’s concern for her brother is trumped by her desire to protect the picture perfect suburban life she’s built for herself. Eventually, Syd guides David to Melanie Bird (Jean Smart), a nurturing but demanding therapist with a sharp mind and unconventional methods. She and her team of specialists – Ptonomy (Jeremie Harris), Kerry (Amber Midthunder) and Cary (Bill Irwin) – open David’s eyes to an extraordinary new world of possibilities.

Legion is produced by FX Productions and Marvel Television, with FXP handling the physical production.

FX is the flagship general entertainment basic cable channel of FX Networks, a business unit of 21ST Century Fox. FX Networks is comprised of FX, FXM and FXX. Launched in June of 1994, FX is carried in 91 million homes. The diverse schedule features a growing roster of critically-acclaimed and award-winning hit dramas series, including The Americans, The Strain and the upcoming Taboo, Legion and Snowfall; the critically-acclaimed limited series American Horror Story, Fargo, American Crime Story and the upcoming Trust and Feud; acclaimed hit comedy series including the award-winning Louie, Archer, Baskets, Better Things and Atlanta. In 2016, FX received a basic cable record 56 Emmy® Award nominations and a basic cable record 18 wins, including 9 for The People v. O.J. Simpson: American Crime Story. FX is the former home of the critically-acclaimed and award-winning hit drama series The Shield, Nip/Tuck, Rescue Me, Damages, Sons of Anarchy and Justified. The network’s library of acquired box-office hit movies is unmatched by any ad-supported television network. FX’s roster of acquired hit series includes Two and a Half Men, How I Met Your Mother and Mike & Molly.

About Marvel Entertainment and Marvel Television

Marvel Entertainment, LLC, a wholly-owned subsidiary of The Walt Disney Company (NYSE: DIS), is one of the world’s most prominent character-based entertainment companies, built on a proven library of more than 8,000 characters featured in a variety of media over seventy-five years.  Marvel utilizes its character franchises in entertainment, licensing and publishing.

Marvel Television develops and produces some of the world’s most creative and popular live-action and animated programming for broadcast and cable television networks plus digital platforms including a historic deal with NETFLIX. Its portfolio of self-produced series includes “Marvel’s Agents of S.H.I.E.L.D.” for ABC, ”Marvel’s Daredevil,” “Marvel’s Luke Cage,” and the Emmy and Peabody Award-winning “Marvel’s Jessica Jones” for NETFLIX and “Marvel’s Ultimate Spider-Man,” “Marvel’s Avengers” and “Marvel’s Guardians of the Galaxy” for Disney XD. Marvel Television’s upcoming projects include “Marvel’s Iron Fist and the culminating Marvel’s The Defenders” for NETFLIX as well as “Marvel’s The Punisher” (NETFLIX), “Marvel’s Cloak & Dagger” (Freeform), “Legion” (FX), and “Marvel’s Runaways” (Hulu).