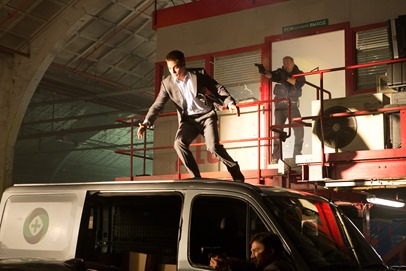 Tom Clancy never really got deeply into the story of how Jack Ryan came to be a hero, but Jack Ryan: Shadow Recruit does a lovely job of filling in that background and grounding the character in today’s world. There’s not much we haven’t seen before, but Kenneth Branagh gives it some serious zip and Chris Pine makes a convincing Ryan.

How did Tom Clancy’s action-techno hero, Jack Ryan come to be such a badass? Well, he left university early after watching the 9/11 attacks from his university in London, joined the Marines and got shot down over Afghanistan. And that’s just to start.

Even though Shadow Recruit is an origin story, the early part of the story is condensed – the above sequences take about ten minutes, leading into Ryan’s meeting Cathy Muller (Keira Knightley) when she becomes his physiotherapist as he recovers from being shot down. Inevitably, they become engaged.

Chris Pine makes a very good Ryan – he has that ‘boy scout on a field trip’ attitude that makes Ryan relatable to an audience; Keven Costner exudes a quiet authority and integrity as Ryan’s recruiter, Thomas Harper; Keira Knightley is suitably spunky and open as his fiancée, and Kenneth Branagh (who does a lovely job as director) is superbly menacing as the politely ruthless Viktor Cherevin. Extra points for a very unexpected, cool use of a dog. 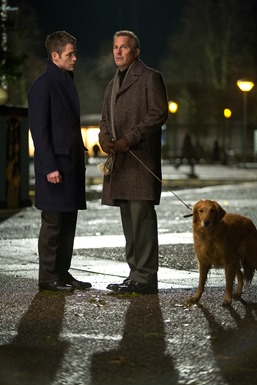 Shadow Recruit sets up Ryan for future exploits without there being a lot of tedious exposition – even though it is almost impossible to make typing sexy. The moment Ryan goes from analyst to action hero is set up by giving a look at his past (he was a Marine, remember?) and flowing naturally into the present.

If there’s nothing terribly original about the action sequences, their context lends them weight – though one car chase sequence does get (you should pardon the expression) run into the ground.

Underlying the straightforward action, Branagh acknowledges the silliness of trying to make Shadow Recruit realistic by emphasizing the seriousness of the action – while shooting the film as realistically as possible. For example, no amount of handheld cinematography can make Ryan’s battle with the enormous Embee Deng (Nonso Anozie, Dracula’s Renfield on TV) as real as Paul Greengrass made Jason Bourne’s fight scenes, so there’s a kind of James Bond/Oddjob feel to it.

Another smart move is keeping Shadow Recruit well under two hours in length. At 105 minutes, it has enough to set up characters, kick a little butt and entertain like crazy without ever testing its audience’s patience.

Overall, Jack Ryan: Shadow Recruit is a much better than average action thriller and show Pine capable of carrying two franchises if it’s a hit.