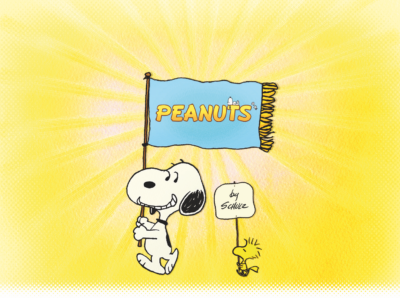 Peanuts – a new series adapting the work of Charles M. Schulz for television – is coming to Boomerang. The series will premiere on Monday, May 9th and new episodes will follow daily at 11:30 a.m. ET/8:30 a.m. PT.

THERE’S A NEW GANG ON BOOMERANG! ALL-NEW SERIES, PEANUTS, PREMIERES ON MONDAY, MAY 9

Peanuts, the brand-new animated series based on one of entertainment’s most iconic brands, heads to Boomerang on Monday, May 9. For the first time, the individual Peanuts print comic strips come to life in vignettes filled with humor and heart for the whole family. New episodes premiere daily at 11:30 a.m. ET/8:30 a.m. PT.

The series captures the spirit of the timeless adventures of Charlie Brown’s gang and his wildly imaginative, supremely confident and world-famous beagle, Snoopy. The watercolor art style, textured backgrounds and framing deliver a viewing experience that will excite both classic Peanuts enthusiasts and new fans alike.

Viewers will be able to catch a sneak peek of Peanuts on Cartoon Network the week of May 9 at 10:30 a.m. (ET/PT) and further engage with the series as select individual shorts roll out on the Cartoon Network video app.

Boomerang’s exclusive U.S. premiere of Peanuts further establishes the network as a prime destination for original, family-friendly animated programming with a slate that includes Bunnicula, Wabbit, Be Cool, Scooby-Doo!, The Tom and Jerry Show, and the hour-long special Super Hero High.

Peanuts is produced by Normaal Animation under license from Peanuts Worldwide LLC.

Launched in the U.S. on April 1, 2000, and now aligned across 13 international feeds, Boomerang is Turner’s global 24-hour, all-animation network for kids and families dedicated to showcasing both timeless cartoons from the Warner Bros., Hanna-Barbera, MGM and Cartoon Network libraries, as well as exclusive acquisitions and original productions from around the world.

Turner, a Time Warner company, creates and programs branded news, entertainment, animation and young adult media environments on television and other platforms for consumers around the world.