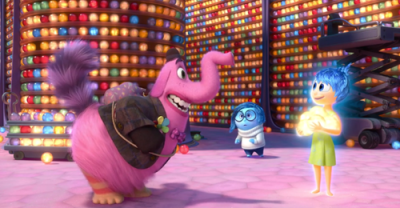 It may be the first time that a Disney•Pixar film didn’t open at #1 at the box office, but it still did $90,440,272 – good for the studio’s best non-Toy Story opening ever (beating, along the way, a little movie called Avatar…).

Disney•Pixar’s “Inside Out” heads to the top with the biggest opening for an original movie in history, topping the previous No. 1 original movie, “Avatar,” by more than $13 million, with $90,440,272 million in domestic box office opening weekend. The film opened Friday, June 19.

Directed by Pete Docter (“Up,” “Monsters, Inc.”), and featuring the voices of Amy Poehler, Bill Hader, Lewis Black, Mindy Kaling and Phyllis Smith, “Inside Out” took in an estimated $132 million globally, with many significant markets yet to open. The film is the second highest Pixar opening of all time, behind 2010’s “Toy Story 3,” and continues to be well received among audiences and critics alike.

Disney•Pixar’s “Inside Out” ventures inside 11-year-old Riley’s mind, where five Emotions are hard at work in Headquarters, led by optimist Joy, whose mission is to keep Riley happy. Fear heads up safety, Anger ensures all is fair and Disgust prevents Riley from getting poisoned—physically and socially. Sadness isn’t quite sure what her role is. When Riley’s family relocates to a big city, the Emotions help guide her through the bumpy transition. Suddenly, Joy and Sadness are swept into the far reaches of Riley’s mind, and Fear, Anger and Disgust are left in charge of Headquarters. Joy and Sadness must venture through unfamiliar places—Long Term Memory, Imagination Land, Dream Productions—to get back to Headquarters, and Riley. Directed by Academy Award® winner Pete Docter (“Monsters, Inc.”, “Up”), produced by Jonas Rivera, p.g.a. (“Up”) and featuring an original score by Michael Giacchino (“The Incredibles,” “Ratatouille,” “Up”), Disney•Pixar’s “Inside Out” is in theatres now.