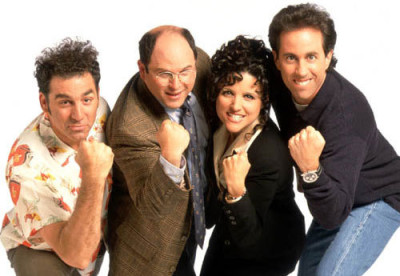 Hulu has been busy – its audience is up; it’s made deals to add Seinfeld and programming from AMC (including The Walking Dead), as well as setting a solid slate of Hulu Originals – with Stephen King’s 11/22/63 as its big event for 2016.

Hulu Acquires Exclusive Streaming Rights to All Episodes of Seinfeld

In addition to presenting groundbreaking content deals and the upcoming slate of Hulu Originals, the company took the stage to publicly unveil new business growth benchmarks – including a 50% increase in subscribers – advertising innovations, and a deal with Cablevision Systems Corporation that will be rolled out over the next year.

Since launching seven years ago, Hulu continues to grow from all sides of the business. Today, the company announced that its subscriber base has grown to nearly nine million subscribers, a 50% increase in subscriber base since 2014. Within the first 90 days of 2015, total streams have increased by 77% and, in that same period of time, viewers have already streamed over 700 million hours of premium content on Hulu. On average, each Hulu viewer is watching at least 30% more content.

“Every category of measurement including hours watched and hours streamed is up dramatically year over year. With additional marketing spend, bigger content acquisitions and a new slate of premium originals, the Hulu drumbeat will only continue to grow louder and louder,” said Mike Hopkins, CEO of Hulu.

Hulu Becomes the Exclusive SVOD Home to all Episodes of Seinfeld

Hulu’s SVP, Head of Content, Craig Erwich was joined by iconic comedian Jerry Seinfeld on stage at the Hulu Upfront to announce that Hulu has acquired the exclusive SVOD rights to all episodes of the award-winning, hit series Seinfeld. After becoming one of the most successful sitcoms of all time, all nine seasons of the timeless comedy series will make their SVOD debut exclusively on Hulu.

The series comes to Hulu in a new deal with Sony Pictures Television. Every episode of Seinfeld will be available for Hulu subscribers to stream this June.

“There’s no question that Seinfeld has played a major role in TV history, which is why we cannot wait to make all episodes of the series available to stream for the first time ever on Hulu. Whether you are an existing fan who just wants to relive your favorite moments over and over again, or are a new viewer who wants experience Seinfeld from the very beginning, Hulu will now be your destination to stream what has been dubbed as one of the greatest shows of all time,” said Craig Erwich, SVP, Head of Content, Hulu.

An Emmy and Golden Globe winner for Best Comedy Series, Seinfeld is one of the most popular, most award-winning and longest-running comedy series of all time. Jerry Seinfeld stars as a stand-up comedian whose life in New York City is made even more chaotic by his quirky group of friends who join him in wrestling with life’s most perplexing, yet often trivial questions. Often described as “a show about nothing,” Seinfeld mines the humor in life’s mundane situations like waiting in line, searching for a lost item, or the trials and tribulations of dating. Co-starring are Julia Louis-Dreyfus as Jerry’s ex-girlfriend and current platonic pal, Elaine Benes; Jason Alexander as George Costanza, Jerry’s neurotic hard-luck best friend; and Michael Richards as Jerry’s eccentric neighbor, Kramer.

Hulu announced a groundbreaking, multi-year deal with AMC Networks Inc. for the exclusive SVOD rights to new and upcoming primetime scripted comedy and drama series from AMC, IFC, BBC America, Sundance TV and WE tv. The new agreement will make Hulu the exclusive streaming home to the highly anticipated companion series to The Walking Dead, titled: Fear the Walking Dead. Through the deal, Hulu will – over time – become the SVOD home to a diverse and comprehensive collection of AMC Networks Inc.-produced content.

Hulu will also become the streaming home for a significant number of films from the IFC Films collection.

Full seasons of future series produced by AMC Networks will be available to stream exclusively on Hulu following their network season runs.

“We believe in the combination of compelling content and technology to engage audiences and deliver viewers back to the linear television experience,” said Ed Carroll, Chief Operating Officer, AMC Networks. “AMC Networks has been the original home of some of the most popular shows in the history of online streaming, and we are excited about this new partnership with Hulu, a growing company that has created a network-branded environment for content in a highly competitive space.”

“AMC Networks has an incredible reputation and track record in producing captivating storytelling across a variety of genres for true connoisseurs of television,“ said Mike Hopkins, CEO of Hulu. “This huge partnership guarantees that Hulu viewers will soon be able to enjoy the newest slate of premium programming from some of the top cable networks.”

Over the next few years, Hulu will roll out Programmatic Ad Buying, a new service that will combine Hulu’s data with that of a brand’s in order to provide even more effective targeting solutions. Programmatic advertising capabilities on Hulu will utilize media automation and data to build advertisements into the most effective series, episodes and time slots. This will allow Hulu to target the right ad to the right user at the right time.

In its first-ever deal with a cable or satellite provider, Hulu announced that it would soon be available to Cablevision Optimum customers. Optimum is the first cable provider to announce plans to provide its customers with access to Hulu’s comprehensive catalog of content. The deal will make Hulu accessible directly to Optimum subscribers in the New York area. Pricing and availability date will be announced in the near future.

“At Hulu we believe users should have the ability to consume their favorite content, when, where and how they want,” said Tim Connolly, SVP, Head of Distribution, Hulu. “Even with the rapid growth in streaming, there is a huge audience that consumes television through their cable provider, and we want to be there for them too.”

“The partnership with Hulu reflects Cablevision’s desire to meet customers where they are,” said Kristin Dolan, Chief Operating Officer, Cablevision. “There is a new generation of consumers who access video through the Internet, and whatever their preference, Cablevision will facilitate a great content experience.”

Hulu’s commitment to becoming more accessible to viewers, across more devices, will continue to be a priority in 2015 and the company will roll out on several providers beginning this summer through additional MVPD deals.

Assets for Hulu’s 2015 slate of original and exclusive programming, including photos, are available upon request.