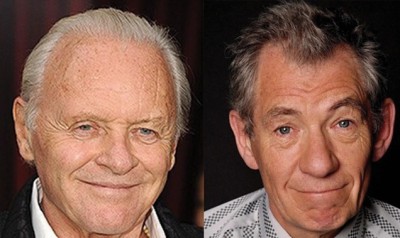 Production has begun on the Starz/BBC Co-Production of The Dresser – one of the great plays about life in the theater. The Dresser stars, Anthony Hopkins and Ian McKellen, are working together for the first time.

The Dresser takes place during one night during WWII. Bombs are falling but a certain theater company is anxious for another reason. They are putting on King Lear and Sir, the actor/manager who is playing Lear, is nowhere to be found! It falls to his dresser, Norman, to find him and get him ready before curtain.

No premiere date has been set at present. for more, follow the jump.

Production Commences in London on the STARZ and BBC Co-Production of “THE DRESSER” Starring Anthony Hopkins and Ian McKellen,

Emily Watson and Sarah Lancashire round out an All-Star Cast

Beverly Hills, Calif., March 3, 2015 – Starz, in partnership with the BBC, today announced that production has officially begun on the movie for television “The Dresser,” an adaptation of Ronald Harwood’s play, to be directed by Richard Eyre (Notes on a Scandal, Iris). The production will film in and around London.

“The Dresser” brings together Anthony Hopkins and Ian McKellen working together on film for the first time. Both men were acclaimed for their own stage roles as Shakespeare’s great tormented king: Hopkins at The National Theatre under the direction of David Hare in 1986 and Ian McKellen in Trevor Nunn’s production for the RSC in 2007. The television film is directed by Richard Eyre who directed an award winning production of the play with Ian Holm for the National Theatre in 1997.

Rounding out the stellar cast are Emily Watson (The Theory of Everything, War Horse) as “Her Ladyship” and Sarah Lancashire (“Happy Valley,” “Last Tango in Halifax”) as stage manager “Madge.” Also in the cast are Vanessa Kirby as “Irene,” Edward Fox as “Thornton,” Tom Brooke as “Oxenby/Edmond,” John Ashton as “Gloucester,” Ian Conningham as “Kent,” Annalisa Rossi as “Goneril,” Helen Bradbury as “Regan,” Carl Sanderson as “Cornwall,” Matthew Cottle as “Albany” and Martin Chamberlain as “Gentleman.”

“The Dresser” tells the story of one fateful night in a small regional theatre during World War II as a troupe of touring actors stage a production of Shakespeare’s King Lear. Bombs are falling, sirens are wailing, the curtain is up in an hour but the actor/manager “Sir” who is playing Lear is nowhere to be seen. His dresser “Norman” must scramble to keep the production alive but will Sir turn up in time and if he does will he be able to perform that night?

The play is one of the great portraits of life in the theatre and was first adapted for the screen by Harwood himself 32 years ago, in the 1983 Peter Yates film starring Albert Finney and Tom Courtenay. The current production reverts to Ronald Harwood’s original text and presents the play as it was written for the stage.

Playground, founded in 2012 by Colin Callender, is committed to producing quality drama for the screen and the stage bringing together the finest US and UK talent from the worlds of theatre, film, and television. Callender won his first Emmy for the television adaptation of the RSC’s The Life and Adventures of Nicholas Nickleby and, as president of HBO Films, was responsible for an unprecedented award-winning slate of movies and miniseries.  Playground recently produced the six-part miniseries adaptation of Hilary Mantel’s Wolf Hall starring Mark Rylance, Damian Lewis, Claire Foy and Jonathan Pryce that has just completed its run on BBC and premieres on Masterpiece in April 2015.  It is also partnered with Charlie Pattinson’s New Pictures on the Golden Globe nominated The Missing, an eight part thriller for the BBC and Starz.

Sonia Friedman Productions, founded in 2002, is a West End and Broadway theatre production company responsible for some of the most successful theatre productions in London and on Broadway over the past few years.  Friedman has developed, initiated and produced over 140 new productions and has won numerous Olivier and Tony Awards®, including a record-breaking 14 at this year’s Olivier awards (Best New Musical, Best New Play, Best Revival of a Musical and Best Revival of a Play, among others).

Recent West End and Broadway productions and co-productions include: the UK premiere of ‘The Book of Mormon’, Jez Butterworth’s ‘The River’ on Broadway, starring Hugh Jackman, ‘Electra’, ‘King Charles III’, ‘Sunny Afternoon’, ‘Shakespeare in Love’, ‘Jerusalem’, ‘Ghosts’, ‘Mojo’, ‘Chimerica’, ‘Twelfth Night & Richard III’ and ‘Old Times’. Forthcoming productions include ‘The Nether’, ‘Bend it Like Beckham the Musical’ and ‘Hamlet’ starring Benedict Cumberbatch. Sonia will also collaborate with J. K. Rowling on a new stage play to be based on the Harry Potter stories in co-production with Colin Callender.

‘The Dresser’ marks Friedman’s second television drama production, which follows directly after her current partnership with Playground Entertainment on the six-part mini-series adaptation of Hilary Mantel’s ‘Wolf Hall’ for the BBC and Masterpiece co-produced by Company Pictures.

Sonia Friedman Productions is a subsidiary of the Ambassador Theatre Group.