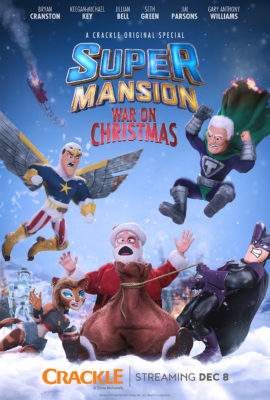 That dysfunctional group of self-righteous superheroes, The League of Freedom, are about to have a  Christmas they’ll never forget.

Check out the teaser for Crackle’s Supermansions: War on Christmas after the break. The spirited holiday special premieres on December 8th.

Stream Season One for Free Using the Crackle App For TVs, Connected Devices, Game Consoles and Mobile Devices or Online

“SuperMansion: War On Christmas” focuses on a dysfunctional group of self-righteous superheroes, The League of Freedom, who can’t agree on anything, but  must band together to save Christmas when an interstellar imp, Mr. Skibumpers (Jim Parsons), unleashes a real-life Santa Claus (Gary Anthony Williams) who experiences an existential crisis and runs amok. Ultimately, the team comes to understand that their differences of opinion are what the holiday spirit is all about.

Season two of “SuperMansion” will return in early 2017, as previously announced at the Crackle upfront in April.  You can binge-watch all 13 episodes of season one for free on Crackle now.