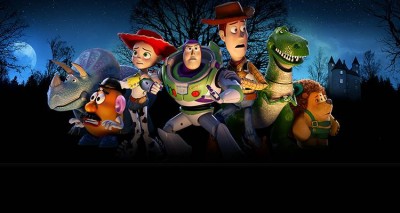 ABC is doing Halloween up proud. Besides annual treats – It’s The Great Pumpkin, Charlie Brown; Toy Story Of TERROR – the season of Trick or Treat infiltrates several of the network’s series, scripted and unscripted.

The Halloween ep of Modern Family finds Claire letting Phil plan for Halloween (a true sacrifice – Halloween is her holiday!); the Hecks endure Twilight Zone-ish events on The Middle; even daytime’s The Chew gets in on the act with ghoulish good and killer cocktails!

Following are dates and times for ABC’s lineup of Halloween programming. All times are ET.

“The Chew” (1:00-2:00 p.m.) – All week long “The Chew” is celebrating Halloween. From ghoulish goodies and killer cocktails to tips for decorating on a dime, co-hosts Mario Batali, Michael Symon, Carla Hall, Clinton Kelly and Daphne Oz have viewers covered to celebrate this frighteningly delicious holiday in style. On Friday, October 30, the co-hosts will reveal their Halloween costumes which they each secretly chose for each other earlier in October.

“Fresh Off the Boat” (8:30-9:00 p.m.) – “Miracle on Dead Street” It’s the Huangs’ first Halloween in the suburbs, and Louis is determined to turn their “dead” street into a prime destination for trick-or-treaters. And as Louis, Eddie, Emery, Evan and even Grandma Huang show off their elaborate costumes, Jessica has bigger plans – to protect her investment property from teenage pranksters.

“The Middle” (8:00-8:30 p.m.) – “Halloween VI: Tick Tock Death” – Halloween finds the Hecks in their own “Twilight Zone”-type stories, with Brick providing an introduction to each. Brooke Shields returns as trashy neighbor Rita Glossner.

“The Goldbergs” (8:30-9:00 p.m.) – “Couples Costume” – When Dana comes to visit Adam for Halloween, he wants to spend the night with her and not Beverly. Trying to cope with this turn of events, Beverly decides to teach Adam a lesson about how dangerous the holiday can be, but the tables turn on Beverly. Later, Barry and Erica convince Adam to take Dana to a haunted house. Adam refuses to go back inside when Dana loses her promise ring, and an unlikely family member helps him.

“Modern Family” (9:00-9:30 p.m.) – “Halloween 3: AwesomeLand” – Even though Halloween is Claire’s holiday, she allows Phil to take over this year. So, instead of her usual fright-fest theme, he decides to turn the house into AwesomeLand! Gloria picks out Princess Fiona and Shrek costumes for her and Jay, but Jay decides he wants to be Prince Charming – complete with a full head of gorgeous hair – and with the hair comes a new sense of confidence. Elsewhere, Cameron gets overwhelmed by the day’s activities and Mitchell has closing arguments for a huge case, and it doesn’t help that the stenographer is dressed like a spider. Guest stars Steve Zahn (“Treme”) and Andrea Anders (“Better Off Ted”) return as the Dunphy’s neighbors.

“black-ish” (9:30-10:00 p.m.) – ”Jacked o’ Lantern”  – Ever since he was a kid, Dre has loved Halloween. Now that he lives in one of those “good candy neighborhoods,” kids come from all over the city to trick-or-treat, including Dre’s own nieces and nephews. The cousins are known for roughhousing and the Johnson kids aren’t happy when they come around, but Dre feels his kids could use some toughening up. Meanwhile, Dre gets a surprise visit from his own cousin, June Bug (guest star Michael Strahan).

“General Hospital” (3:00-4:00 p.m.) – Tricks and treats abound leading up to Port Charles’ big Halloween bash at the Haunted Star on Friday, Oct. 30 with a dramatic reveal that will change everything.

“Jimmy Kimmel Live” (11:35 p.m.) – It’s Jimmy Kimmel’s annual Halloween celebration! Jimmy Kimmel, his band Cleto and The Cletones, his announcer Dicky Barrett and his security guard Guillermo Rodriguez will continue their yearly tradition and all dress up for the holiday — this time, as legendary “Star Wars” characters along with special guests Harrison Ford (“Star Wars: The Force Awakens”) and Katie Lowes (“Scandal”).

“Last Man Standing” (8:00-8:30 p.m.) – “Halloween” – On Halloween, Mike and Chuck decide to spend the evening watching football instead of passing out candy with their wives. But when Vanessa and Carol start pranking them, the competition is on to see who can out-prank who. Kyle dresses up like his hero, Ed, but Ed has a surprising response to Kyle’s imitation of him.

“Dr. Ken” (8:30-9:00 p.m.) – “Halloween-Aversary” – The episode opens with a flashback to Ken’s botched marriage proposal on Halloween. Now 20 years later, Ken tries to arrange the perfect re-proposal for Allison. Meanwhile at the office, which is decorated for Halloween, Damona and Julie accidentally drug Pat and then take advantage of their boss’ suddenly giving mood.