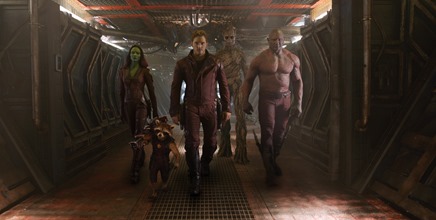 The cast members will talk about the movie, give a first look at exclusive content and match their knowledge of trivia against 5-year old superhero expert Mia Grace. For more, follow the jump.

"JIMMY KIMMEL LIVE" TO WELCOME THE CAST OF MARVEL’S “GUARDIANS OF THE GALAXY” ON MONDAY, JULY 21

Jimmy Kimmel welcomes Chris Pratt, Zoe Saldana, Dave Bautista, Vin Diesel and Bradley Cooper to a special “Guardians of the Galaxy” episode of “Jimmy Kimmel Live” on Monday, July 21 the same evening as the film’s worldwide premiere.  The stars of the highly anticipated new film will talk about the project and debut exclusive content.

Kimmel will also test the Guardians’ Marvel knowledge as each actor goes head-to-head in a trivia contest against Mia Grace, a 5-year-old superhero expert from Albany, New York.

"Jimmy Kimmel Live" broadcasts from Disney’s El Capitan Theater, located on Hollywood Boulevard in the heart of the Walk of Fame.  This location gives the show unique character that Jimmy showcases regularly by interacting with the local superheroes parading along the boulevard and challenging tourists outside to participate in live comedy bits.

GUARDIANS OF THE GALAXY OFFICIAL BOILERPLATE:

Enjoy “Jimmy Kimmel Live” on the web at youtube/JimmyKimmelLive.