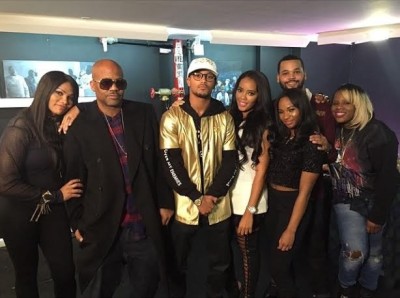 They are the children of hip hop pioneers and legends – out to make a name for themselves.

Growing Up Hip Hop follows Angela Simmons, Romeo Miller, Damon “Boogie” Dash, Kristinia DeBarge, TJ Mizell and Egypt Criss as they set out on their own in an effort to step out of their famous parnts’ shadows.

Growing Up Hip Hop premieres on WE tv on Thursday, January 7, 2016 (10/9C). Check out the series teaser after the break.

With their love and work lives intertwined, each member of this this tight-knit group is facing a surprising challenge that will test their loyalties within the group and even relationships with their own mothers and fathers.

Angela Simmons, daughter of rap pioneer Rev. Run of Run- D.M.C, is a hip hop socialite, model and fashion designer of her own line, Foofi, named after her toy poodle. Angela is finding her independence and determined to make a name for herself in the industry on her own. Love has also been a struggle for Angela but a long-standing friendship with Romeo Miller could turn into something more.

Romeo Miller is a musician and Hollywood actor juggling his busy career with a fast-paced globetrotting lifestyle. The son of hip-hop artist and entrepreneur Master P, Romeo Miller has known fame since he was a child star formerly known as Lil’ Romeo. Ever since he was a little boy, his father has been grooming him to take over the No Limit Empire. When given the keys to the coveted No Limit kingdom, will he have what it takes to wear the crown?

Damon “Boogie” Dash is the namesake of his father, former Roc-A-Fella Records music and media mogul, Damon Dash, and just like his dad, Boogie is an entrepreneur. In 2011, he and high school pal founded Chipz Cookies, which are currently sold in grocery stores throughout Manhattan. Boogie also owns a record label and an art gallery in gallery in NYC. His father is constantly putting pressure on him to succeed on his own and pushes him to work hard for everything.

Kristinia DeBarge is the daughter of James DeBarge from the legendary yet troubled group DeBarge, and a singer/songwriter in her own right.  She began singing when she was 3-years old and at 12-years old recorded the duet “How I Feel Inside” with her father. Questioning whether to reunite with her drug addicted father, Kristinia, leans on her uncle, music legend El DeBarge as she struggles to choose between family and fame.

TJ Mizell is the son of Jam Master Jay, one-third of the famous rap group Run-D.M.C. He recently returned to New York stepping into his famous father’s shoes as a DJ. TJ spins at the hottest events and venues around the world and best known as A$AP Ferg’s DJ. TJ is the “nice guy” and often looks to close friend Angela for support as their fathers were both in Run-D.M.C. and view each other as family. TJ however is still haunted by the memories of his father’s death and determined to keep his legacy alive in a city that revered him.

Egypt Criss, the daughter of Sandra “Pepa” Denton from Salt-N-Pepa and rap icon Treach from Naughty By Nature, is actively pursuing a solo music career. Pepa is eager to help Egypt navigate the industry quickly assuming the position as “mom-ager.” Between Pepa’s protective nature and heavy involvement in Egypt’s budding career, will it prove to be too much for the aspiring singer?

The season begins as this tight-knit group of twenty something’s gear up for a week of high profile parties and events. While together in New York City they attend the opening of “Boogie’s” art gallery, but with the seasoned hip hop legends in attendance, casual conversation turns into an intense old school lesson. TJ celebrates his 24th birthday with an exclusive party, but Angela is forced to leave suddenly when a suspicious fan in the crowd gets a little too close for comfort. Kristinia and TJ are confirmed to perform at the debut showcase of Angela’s new faux fur fashion line; but when personal issues involving Kristinia’s estranged father arise, will it ruin the evening? Tune In Thursday Jan 7th at 10pm ET/PT.

Go inside Growing Up Hip Hop at WEtv.com

Visit www.wetv.com for more on Growing Up Hip Hop. Get sneak peeks, deleted scenes, photo galleries, blogs from the cast and more. You’ll also find the weekly behind-the-scenes scoop and exclusive videos. “Like” the Growing Up Hip Hop page on Facebook, follow @GrowingUpHipHop on Twitter and @WEtv on Instagram for the full insider experience.