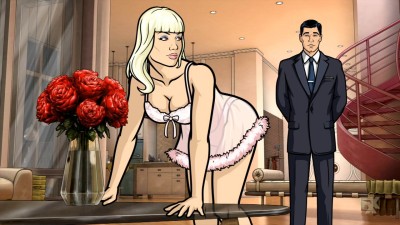 With Archer’s seventh season coming to FXX in 2016, the network has scheduled an Archer’s Greatest Loves mini-marathon for Saturday, September 26th.

The six-episode, three-hour event will finding Sterling Archer reflecting on some of his greatest loves from the past. That can’t be good for him…

In anticipation of Archer returning for its seventh season next year, Sterling Archer is reflecting on some of his greatest loves from the past with a special mini-marathon airing Saturday, September 26 from 10 PM – 1 AM ET/PT on FXX.

The Archer’s Greatest Loves mini-marathon will feature the following episodes:

Archer goes to great lengths to cover up discrepancies in his expense account as he attempts to access the agency’s mainframe computer. Cyril and Lana’s Friday night dinner date is interrupted by work.

After Malory’s brief scare with breast cancer, another agent decides to be tested for the disease, with a tragic result. The other agent is Archer, and the tragic result is that yes, he has breast cancer. Because a career spent disarming nuclear warheads and having sex in x-ray machines will tend to do that.

Archer, in hiding since the murder of his fiancée, is finally tracked down in the South Pacific by handsome adventurer Rip Riley. To get Archer safely back, Riley will have to survive the elements, a plane crash, a shark attack, starvation, drowning, exposure and possibly pirates. Oh, and Archer.

Archer is faced with a dilemma when his murdered fiancée, Katya, miraculously reappears. In Krieger’s lab.

Archer heads to the Mexican border to capture a notorious coyote, which is Spanish for coyote.

Archer and the rest of the gang are the guests of Gustavo Calderon (Fred Armisen) and his wife Juliana (Lauren Cohan). Calderon is a big fan of Cherlene but Juliana is a bigger fan of Archer.

FXX is the new basic cable entertainment network from FX Networks which launched on September 2, 2013. Geared towards a young adult audience, the schedule features original series, movies, and acquired series. The channel is anchored by the acclaimed hit comedies It’s Always Sunny in Philadelphia, Archer, The League, You’re the Worst, Man Seeking Woman and the upcoming Cassius and Clay and The Untitled Tracy Morgan Project (TBD). FXX is also the exclusive cable home to The Simpsons, the longest-running comedy in TV history, the late night animated block Animation Domination, and acquired hit series such as In Living Color, Mad About You and Parks and Recreation. FXX is carried in more than 78 million homes. FXX and its sister channels FX and FXM comprise FX Networks, a business unit of 21 Century Fox.