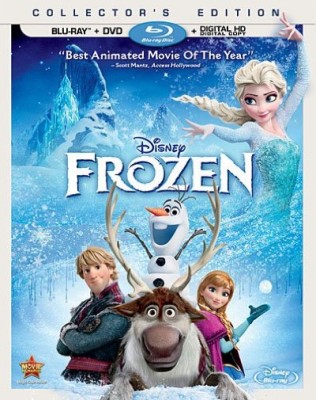 Having grossed over $1 billion in worldwide box office, it’s safe to say Frozen is Disney’s biggest hits in years. It is now available in glorious Blu-ray for your home viewing pleasure.

Sisters Elsa (Idina Menzel) and Anna (Kristen Bell) start off very close until an accident with Elsa’s magical powers injures Anna. To protect Anna, Elsa pulls away from her sister and hides herself away from the Kingdom. After their parents die, Elsa becomes queen and her secret comes out in the worst way possible. Her powers goes out of control and she unintentionally curses her entire Kingdom. It’s up to Anna and her companions a funny Snow Man named Olaf (Josh Gad) and rugged Kristoff (Jonathan Groff) to travel through her Frozen Kingdom to find her lost sister. 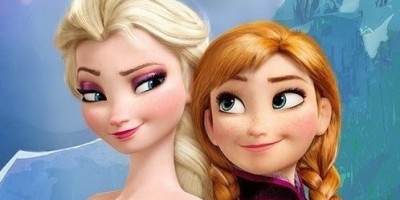 In many ways Frozen is a by the numbers Disney Animated production but at the same time the storytelling manages to feel fresh and breathes new life into Disney Animation. The music is standard, by the numbers, mostly bland if not for the breakout hit Let It Go – which I run hot and cold on. At times I really love it and others, kind of sick of hearing it. The story is actually fairly complex and filled with commentary about the importance of family and the Prince charming in here is not the one typical of Disney films. I enjoyed the idea that Elsa wasn’t evil, just scared.

I like that they don’t use well known “voices” so it’s easier to get swept up into the characters. But like I said, the weak point here is the music and while I generally like Kristen Bell, her singing voice is a bit grating and she does the bulk of the heavy lifting here. Which was surprising considering Indina Menzel is the Broadway veteran and has some pipes on her. However it would have been too “obvious” having her play Anna. 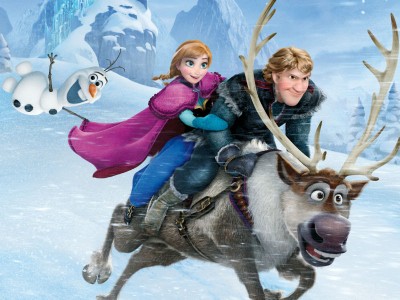 The audio and video transfer on this disk is flawless, but I’m not a fan of computer generated animation. I would never say that it is not technically brilliant but it just looks kind of soulless to me.

Either I received a defective disk or the Navigation is so broken that I couldn’t figure out exactly what I was looking at when it came time for the Bonus features. It took several tries before I figured out how the navigation worked. It is counter intuitive, highlighted items do not indicate your selections.

Highlights include the Original Theatrical Short “Get A Horse!” Disney’s Journey from Hans Christian Andersen To Frozen, and four Deleted Scenes and do we really need 4 different music videos for Let It Go? I mean really, talk about overkill!  Each feature is less than 5 minutes.  Disney is pushing their new Disney Anywhere movie app so this includes a digital copy version available for iTunes or Ultraviolet (I wish they’d offer it for both platforms with the Bonus features). There’s also a coupon where you can get a copy of the 32-Song soundtrack for $7 (which I bought.)

This is another instance where I’m alone on my island, Frozen isn’t a bad film by any means, but I’ll admit I don’t understand why people are going crazy over it. This lazy Blu-ray release doesn’t help either. Considering Disney Home video has recently jacked the prices up on their Blu-ray releases, and how much they generally pack into their home video release I expect a lot more from them. This feels pretty thin and pathetic and feels like a rip off.

2 thoughts on “Frozen doesn’t get the DVD/Blu-ray Release it Deserves. Michelle’s Review”