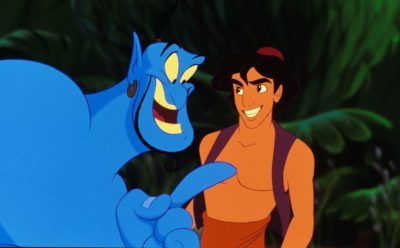 This year, Freeform’s annual Funday programming event will feature some of your favorite Disney classics, including (but not limited to): Aladdin, The Incredibles,  Snow White and the Seven Dwarves and Wreck-It Ralph.

Fall is fast approaching and with it, a new school year, changing weather and before you know it, the holidays! Take one last relaxing weekend to watch some of your favorite comforting Disney classics during Freeform’s Funday programming event, starting SATURDAY, SEPTEMBER 17 and continuing through SUNDAY, SEPTEMBER 18.

Horton (Jim Carrey) is a friendly elephant who one day hears a cry for help coming from a small speck of dust. Upon closer investigation, he discovers an entire race of microscopic Whos living atop it. Horton befriends the Whos and protects their tiny world, but his jungle neighbors worry Horton has gone crazy and believes in things that don’t exist. Assuming that nothing so small could possibly be alive, Horton’s friends conspire to destroy the speck of dust in order to rouse him from his delusions, but he is determined to save the tiny particle. The all-star cast also includes Steve Carell, Carol Burnett, Will Arnett, Seth Rogen, Isla Fisher, Jonah Hill and Amy Poehler. “Dr. Seuss’ Horton Hears A Who!” repeats on Sunday, September 18 at 8:00 a.m. EDT.

This Academy Award®-winning adaptation of Edgar Rice Burroughs’ story begins deep within the jungle when baby Tarzan (Tony Goldwyn) is adopted by a family of gorillas. Even though he is shunned as a “hairless wonder” by their leader, Tarzan is accepted by the gorillas and raised as one of their own. Together with his wisecracking ape buddy Terk (Rosie O’Donnell) and neurotic elephant pal Tantor (Wayne Knight), Tarzan learns how to swing through the trees and survive in the animal kingdom. His two worlds collide with the arrival of humans, forcing Tarzan to choose between a “civilized” life with the beautiful Jane (Minnie Driver) and the life he knows and loves with his gorilla family. Disney’s “Tarzan” repeats on Sunday, September 18 at 12:15 p.m. EDT.

The classic animated Disney film that started it all. Snow White lives with her stepmother, the evil Queen. Jealous of Snow White’s beauty, she orders her death, but the Huntsman warns her and she flees for the forest. There she meets seven dwarves who take her in, but the Queen discovers her whereabouts and shows up in disguise with a poisoned apple that sends her into a sleeping curse. Will Snow wake up and go on to be the “fairest of them all?” Disney’s “Snow White and the Seven Dwarfs” repeats on Sunday, September 18 at 2:30 p.m. EDT.

For decades, Ralph (John C. Reilly) has played the bad guy in his popular video game. In a bold move, he embarks on an action-packed adventure and sets out to prove to everyone that he is a true hero with a big heart. As he explores exciting new worlds, he teams up with some unlikely new friends including feisty misfit Vanellope von Schweetz (Sarah Silverman). Then, when an evil enemy threatens their world, Ralph realizes he holds the fate of the entire arcade in his massive hands. Disney’s “Wreck-It Ralph” repeats on Sunday, September 18 at 4:45 p.m. EDT.

This action-packed animated adventure is about a seemingly ordinary family with an incredible secret. Known to the world as superheroes Mr. Incredible (Craig T. Nelson) and Elastigirl (Holly Hunter), Bob Parr and his wife Helen were among the world’s greatest crime fighters saving lives and battling evil on a daily basis. Fifteen years later, they have been forced to adopt civilian identities and retreat to the suburbs to live “normal” lives with their three kids, Violet, Dash and Jack-Jack. Itching to get back into action, Bob gets his chance when a mysterious communication summons him to a remote island for a top secret assignment. He soon discovers that it will take a super family effort to rescue the world from total destruction. Disney-Pixar’s “The Incredibles” repeats on Sunday, September 18 at 7:00 p.m. EDT.

In the heart of an enchanted city, a commoner named Aladdin and his mischievous monkey Abu battle to save the free-spirited Princess Jasmine with the help of their friend, a blue genie. Disney’s “Aladdin” repeats on Sunday, September 18 at 9:45 p.m. EDT.

About Freeform (the new name for ABC Family)