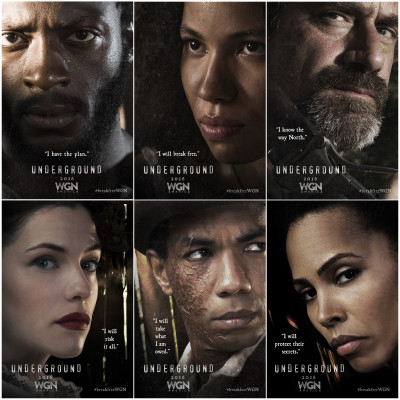 New York, October 11, 2015 – WGN America today kicked off its campaign to introduce audiences to its highly anticipated, original thriller, “Underground,” scheduled to premiere in early 2016.  The first visual image presents a series of six compelling character posters, each with a riveting message offering individual clues to the powerful, unflinching way to reach freedom in the greatest escape story in U.S. history. “Underground,” from executive producers Misha Green (“Sons of Anarchy,” “Heroes”) and Joe Pokaski (“Daredevil,” “Heroes”), and executive producers Academy Award-winner John Legend and Akiva Goldsman, is the epic escape story of the Underground Railroad, told through a group of plantation slaves who band together for the fight of their lives—for their families, their future and their individual freedom.?

In addition to the print campaign, WGN America will offer New York Comic-Con attendees a first-look at “Underground,” during the network’s presentation on Sunday, Oct. 11.  More character-revealing images and trailers for “Underground will follow in late fall as the network prepares for the series premiere in early 2016.

Featured cast and indelible characters unveiled in the posters include:

Additional “Underground” cast and characters include: Marc Blucas (Blue Bloods) as John Hawkes, Elizabeth’s husband and a lawyer whose principles clash with the legislation he’s sworn to uphold; Adina Porter (True Blood, The 100, The Newsroom) as Pearly Mae, a strong-willed wife and mother; Mykelti Williamson (Justified, 24) as Pearly Mae’s husband Moses, a fiery preacher; Johnny Ray Gill (Rectify) as Sam, Rosalee’s half-brother and a talented carpenter; Chris Chalk (The Newsroom, Homeland, Gotham) as William Still, an abolitionist ally; Reed Diamond (Agents of S.H.I.E.L.D.) as Tom Macon, a plantation owner and political candidate; Theodus Crane (The Walking Dead) as Zeke, a formidable slave known for his might on the Macon plantation, but he privately struggles to cope with a painful secret; Renwick Scott (Treme) as Henry, a rebellious teenager with a heart of gold – he idolizes Noah and his loyalty is unflappable; and Jussie Smollett (Empire), who joins his sister Smollett-Bell in the cast as Josey, a wild-eyed runaway who doesn’t trust anyone.