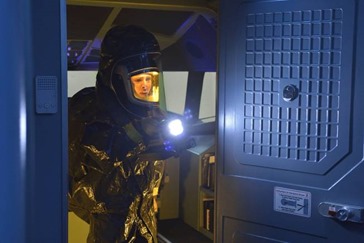 Guillermo Del Toro has a love of the scary and the creepy and so, when he and Chuck Hogan co-wrote a trilogy of vampire novels, they were filtered through his unique sensibility. Now the trilogy is being adapted for television for FX – and the first teaser looks every bit as creepy as we might have hoped for.

Check out the teaser after the jump. The Strain premieres Sunday, July 13th.

#TheStrain is a thriller that tells the story of Dr. Ephraim Goodweather (Corey Stoll), the head of the Center for Disease Control Canary Team in New York City. He and his team are called upon to investigate a mysterious viral outbreak with hallmarks of an ancient and evil strain of vampirism. As the strain spreads, Eph, his team, and an assembly of everyday New Yorkers, wage war for the fate of humanity itself. | Premieres Sunday, July 13th on FX | Follow us at Twitter: http://twitter.com/TheStrainTVNews

Use Google+? Join +The Strain (TV Den) and interact with other fans of the show! http://goo.gl/ILNlto