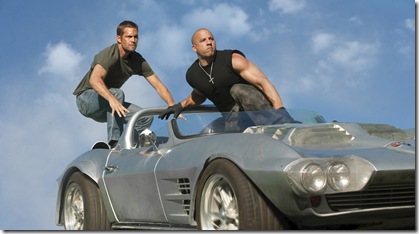 The movies in the Fast & The Furious series have never been ‘films’ – they are popcorn flicks in the truest sense. If you want unbridled action with a minimum of dialogue and a lot of hot cars, gorgeous girls and ripped guys, then this is the series for you.

Fast Five takes everything that we’ve seen in the past four films and ramps it up exponentially. If this movie doesn’t make your adrenaline pump, you probably need some kind of transplant!

Following the events of Fast & Furious, we find Dom [Vin Diesel], Brian [Paul Walker] and Mia [Jordana Brewster] in Rio de Janeiro, meeting up with Vince [Matt Schulze] who has a sweet gig boosting three really hot cars from a train. Problem is, they’re confiscated vehicles under police guard. Before Fast Five is five minutes in, we become aware that the laws of physics are going to be… malleable for the duration.

Events lead to the three deciding that they need to pull one last, big job to fund their disappearance from the radar – a job that goes way beyond boosting hot cars. Which means they need to pull a crew together – which means an all-star team from the characters who have appeared in the series to date.

Enter the chameleon [Sung Kang], the wheels [Gal Gadot], the mouth [Tyrese Gibson], the safecracker [Chris Bridges aka Ludacris]and the muscle [Tego Calderon and Don Omar]. The plan? To boost one hundred million dollars from Reyes[Joaquin de Almeida], the man who controls the Brazilian drug trade.

Complicating matters is Hobbs [Dwayne Johnson], the guy the FBI sends when they really, really want to get someone. He and his team come in like they’re still in America – loud and hard. The Rio police make a show of cooperation even though they’re on Reyes’ payroll – except for Elena [Elsa Pataky], whom Hobbs has requested as a translator.

While Fast five is filled with imaginative chases, fights and gunplay, it’s not going to win any awards for dialogue or acting, but that really doesn’t matter. Chris Morgan’s script is filled with action sequences and plot twists enough for any three other action flicks you’ve seen before. Justin Lin keeps things in high gear and stages some remarkable sequences – again, playing with the laws of physics in ways that it’s best to just ignore in favor of just eating your popcorn and going with the supersonic flow.

Just make sure you stay for an Eva Mendes cameo during the closing credits. There’s a cool twist that sets up Fast Six that you will not see coming.