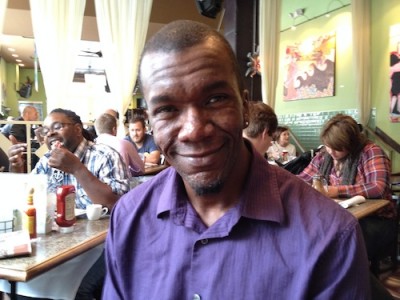 Sometimes I’m so unreliable. Last summer I had a fun lunch with Author Jason Mott and am just now getting around to posting this. I’m blaming iMovie – every sense the interface chance I hate using it – that’s my story. You may not know his name but if you watched Sundance Channel’s surprise hit, The Returned then you sort of know his work.  If you missed that show, don’t worry about it, there is now a major ABC Show called Resurrection that is based on his book and produced by a little Hollywood D lister named Brad Pitt. What would you do if your dead loved ones suddenly re-appeared as if nothing happened? How would society react? No they aren’t zombies.